2 “Daisy,” the One-Off 2004 Cobra Shelby Functional Concept, Is Looking for a Home

Mihnea Radu
Rumors sometimes talk about the return of the Toyota MR2, but it's looking increasingly unlikely that it will happen. So why not celebrate what could be the last little exotic sports car, the Alfa Romeo 4C?
11 photos

The Alfa 4C recently got discontinued, but it used to cost about $67,000. Now that's undeniably a lot of money when the Porsche Cayman and C8 Corvette are supposed to start from around $60,000. But who are we kidding here; there's no such thing as a cheap Porsche or new 'Vette!

And the 4C has a certain exotic flavor to it that the others don't. For starters, it's Italian, and it's built all wrong. You can't put your golfing gear in the back, the cup holders aren't big enough and it doesn't have power steering. Basically, it's the worst car for influencers and the best car if you just want to go driving in something special.

Because of its price and niggling faults, Alfa Romeo didn't sell that many of these sports cars. So we're sure it will become hugely collectible in just a few years. The one Jay Leno recently reviewed is the 4C Spider 33 Tributo, and we just had to check it out because it could be one of the last ever sold. As the denim-clad reviewer puts it, with only a few of these coming to the United States, you'll be the only one on the block to have it. This is #33 or 33 for North America, so it's possibly a landmark car.

The Alfa Romeo 4C is special on its own, built around a bespoke carbon fiber chassis, it's the closest thing to an affordable Ferrari. Granted, it only comes with half the cylinders, but Leno says he can't help but smile every time the turbo boost comes in for the 1.7-liter.

The 4C went through some changes over the years. First, it lost those cheap-looking insect lights, and it later got this open-top version that's barely any heavier. The 33 Stradale Tributo is inspired by the 1967 Alfa Romeo 33 Stradale. It comes with a multitude of carbon fiber accents that are visible from a mile away, such as the roof pillars, mirrors, and the surround for the dual exhaust system. 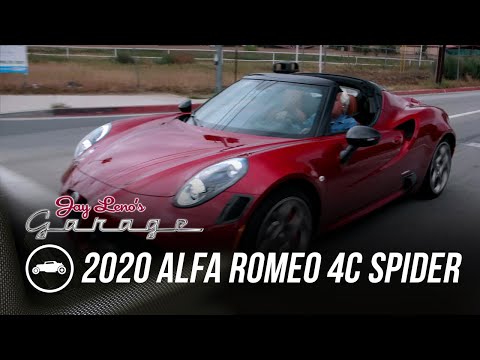