The Avengers franchise had a lot of vehicles over the years, like Tony Stark's Audis or that Harley. But none of them can hold a candle to the 1967 Chevrolet Camaro which Captain America drives... in real life.
4 photos

1967 is an excellent body to have for a Camaro, truly classic in every way. However, this is more of a resto-mod, like one of those Stinger Porsche 911s. It was put together by SpeedKore for Chirs Evans himself. However, Jay Leno got to drive it before all the paparazzi were able to scoop it.

SpeedKore’s Dave Salvaggio tells Leno that the 1967 Camaro was chosen by Avengers co-star Downey Jr. himself. "Tony Stark" was heavily involved in the transformation and wanted to surprise Evans with a special gift once filming ended on their latest movie.

It's interesting how their respective film characters don't get along, often butting heads and nearly killing each other in Civil War. But Downey Jr. is all heart in real life, as the people working with him like to point out.

Under the hood, the old Camaro has been fitted with an LS3 6.2-liter motor which makes 730 horsepower with a little help from a 2.9-liter Whipple supercharger. The Hellcat-beating V8 sends power to the rear via a four-speed push-button automatic transmission.

Also, serious mods were made to the drivetrain to ensure the Camaro handles like a modern car. This includes Detroit Speed sub-frame up front, four-link rear suspension, and Baer performance brakes at all four corners.

Discreet changes to the metalwork are set off by the new paint, which is unlike anything we've ever seen on a classic Camaro. It's called Grigio Verde, meaning Gray Green, and it resembles Audi's non-metallic Nardo. An interior fit for Chris Evans was put together using a combination of brown and black leather parts with wooden accents. There's even a Captain America logo in the center of the steering wheel. 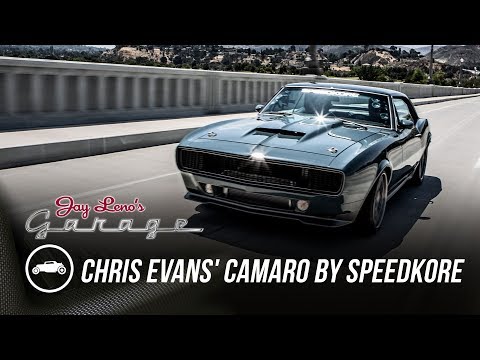