2 Jay Leno Drives the Ferrari 550 Barchetta, Calls It a Relaxing Car With a Needy Clutch

5 Jay Leno Gets Behind the Wheel of the 2,000-HP Rimac Nevera, Says It Can Fix Your Back
Coverstory

Jay Leno Could’ve Died When His 1907 White Steam Car Sprayed Him With Gas, Set Him on Fire

Home > News > VIP
Elena Gorgan
Last Saturday, comedian, TV personality and well-known car collector and specialist Jay Leno was rushed to the hospital following an incident that occurred inside his personal garage. More details on that incident have emerged.
11 photos

The initial statement from Jay Leno’s publicist mentioned a fire and the implication that it’d been something serious. Leno himself issued a statement to confirm the hospitalization and to say that he’d be back to normal after a recovery of two to three weeks.

It might be a tad longer than that, one of his friends tells TMZ. Leno also spoke to the celebrity e-zine, revealing that the fire was caused by his beloved 1907 White steam car, which he’d been working on at the time, to fix a clogged fuel line. One of his friends was nearby, and he had the presence of mind to pull Leno from the vehicle and put out the flames.

Leno says that there was a fuel leak, which saw him sprayed with gasoline from the car’s burner on his face and hands. A spark ignited the gasoline, setting the same areas on fire; as per the media outlet, he’s suffered 3rd-degree burns on his hands and a side of his face, for which he will most likely require skin grafts. Leno doesn’t say the exact words that he could have died, but it’s the conclusion the e-zine draws: this incident was very serious and potentially fatal.

Leno’s long-time mechanic George Swift has also spoke to the media about the fire, confirming all of the above. Swift wasn’t there when it happened, but he tells Access Hollywood that Leno called him after the fact as he was waiting to be taken to the hospital. He had called the fire department, too.

Jay Leno owns one of the most impressive car collections in showbiz, and it features several early automobiles, including a handful of Stanley Steamers, the White steam car that caused the fire (shown in the video below), and a 1925 Double E-20. Steam powered-cars are also called external combustion engines, and they use gasoline or kerosene for a burner that heats the boiler full of water to create the high-pressure steam that puts the pistons into movement. 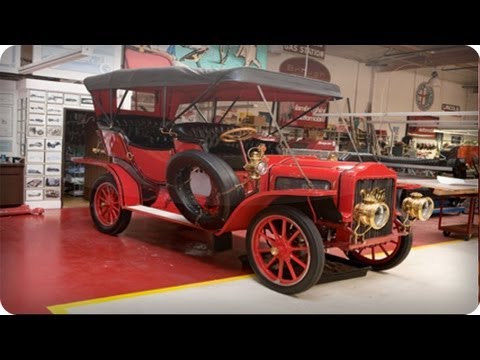 Editor's note: Photos in the gallery show some of Jay Leno's many cars.