Aurel Niculescu
Let’s talk about missed opportunities because, in our book, this is a big one. Jay Leno, the famous petrolhead who’s brought us countless interesting stories, has really disappointed us on this occasion. Do you want to know why? It’s easy: he got the 1,400-hp Mustang Mach-E prototype in the garage and the car didn’t move an inch...
19 photos

Actually, it’s a double miss. This is because Leno had not one – but two Mustang Mach-E vehicles in his garage. And none of them turned a wheel. Seriously, the guy who’s regularly taken for a spin cars that are even more unique got a pair of Mustangs Mach-E and didn’t bother (or wasn’t allowed) to take them to the road.

Sure, we could accept Ford’s refusal to let Leno drive its 1,400-hp Mustang Mach-E. But it’s only because this incredible electric crossover is not street legal. As far as star power is concerned, there was no problem in setting up an encounter between Vaughn Gittin Jr.’s new baby and his famous friend Ken Block, so they don’t have that argument up their sleeve anymore.

On the other hand, it’s beyond us why Ford didn’t agree to allow Jay Leno to take out at least the regular Mustang Mach-E 4X out for a quick spin around the famous garage. It’s not like we’re dealing with a completely forbidden fruit, even if the electric Mustang is not yet available on dealer lots and this isn’t even the latest release in the new Mach-E family.

That honor goes to the newly-introduced GT Performance Edition, which is now the flagship model, complete with 480 electric ponies and an advertised zero to 60 mph (96 kph) acceleration time of 3.5 seconds.

Seriously, there’s even a third missed opportunity: why didn’t they bring this new release instead of the all-wheel drive 4X model? Well, it was probably all for the sake of advertising, and this new video seems like marketing stunt. And we didn’t expect that from Jay...

If you want to check out two guys talking about two cars that have already been dissected on more than one occasion, we’ve got the breakdown. After a quick intro, Jay starts talking about the Mach-E before introducing Ford's new CEO Jim Farley at the 1:40 minute mark.

They start chatting about Mach-E stuff – a.k.a. the specs, which are rather dull because they’re not giving us anything new – until the 20:10 mark when they move on the right side of the screen to discuss the 1,400 version. 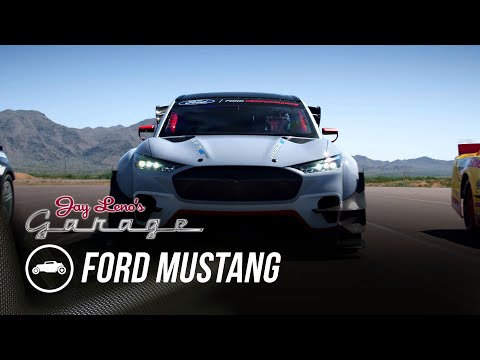