We've talked about Japan before, and we seem to agree it is a lovely weird place full of lovely weird people. The isolation that comes with the territory of being an island nation has made the Japanese culture unique, and pretty hard to understand for most westerners.
1 photo
But that doesn't mean it hasn't got its fair share of Western admirers. People will always be attracted to things that are as different from what they're used to as possible, and if "different" is what you're after, then it's a good idea to visit Japan.

YouTube user effspot did that, and he was lucky enough to have somebody to show him around the place. Being a car spotter, his covering of the trip focused most on the local car culture, and there's plenty of that going on on the streets of Tokyo - from kei cars to extreme bosozoku customization, Japan has it all. However, it would appear that you might be just as lucky going underground, if you know where to look.

You may have seen some of these cars before, but you've probably never seen them all in one place. Neither has effspot, judging by his high level of excitement. And it's easy to understand his reaction to the things he saw there, as we find that abundance of crazy modified Lambos pretty unbelievable on the screens of our computers as well.

The bosozoku-style modified cars are nothing new, but getting the opportunity to watch so many of them under one roof is extraordinary. Don't worry, you're not supposed to really like them, and it's OK if you're appalled by most of what you see because they are an insult to what we consider being in good taste.

Still, if you hit that play button, you won't be able to peel your eyes away from the video, that's guaranteed. The whole experience is a little surreal, with that elevator music going on in the background and the fact that you can never know what's around the corner. Oh, and there just happened to be a Ferrari F50 there as well. Just like that. I'm telling you, get ready for six minutes of absolute craziness. 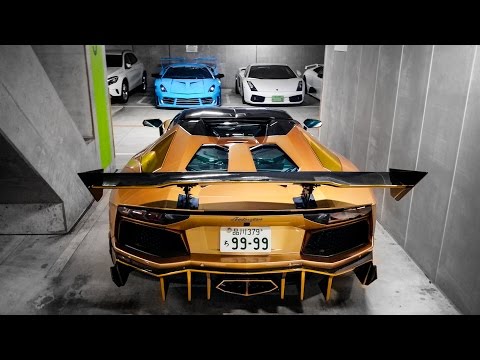