5 KBO's First Cargo E-Bike Promises a Payload Capacity of 400 Lb and a 60-Mile Range
Car video reviews:
Up Next

1969 Mercury Cougar Is a Crazy Widebody Eliminator Concept, Even if Only Digitally

E-bikes, e-trikes, and e-scooters are without a doubt a great alternative to cars, especially in congested urban areas. But there’s just so much you can carry with you on a bicycle, which is why so many people are still reluctant to adopting them as their daily commuter. But this Japanese-made cargo three-wheeler might just win them over, as this baby was engineered to haul.
10 photos

Envision Incorporated has been working on its electric cargo three-wheeler for about six years and has tested several prototypes and designs so far. It’s now at its T5 version of the trike, unveiled in 2021, which is the fifth one, and the manufacturer says this is the closest one to the production version.

With a long wheelbase design, a length of 6.2 ft (1.9 m) and a width of 0.6 m (1.9 ft), Envision Incorporated’s Streek trike stands out through its enormous cargo area, which is highly configurable, depending on what you need it to carry. Two suspended cargo platforms can be mounted on the frame, one on top of the other, and you can also hang cargo accessories such as panniers to the frame.

The Streek is equipped with three electrically assisted wheels, two 18” ones in the front, with an independent suspension system, and a 20” wheel in the rear. All of them come with disc brakes. As for the power assist of the e-trike, the Streek packs a 250W motor and offers a top speed of 15 mph (24 kph).

Although the Streek was supposed to become available for preorder this spring, things got postponed so we are still waiting for the trike’s big launch. Pricing should be somewhere in the $3,000 range, but that is also to be confirmed. 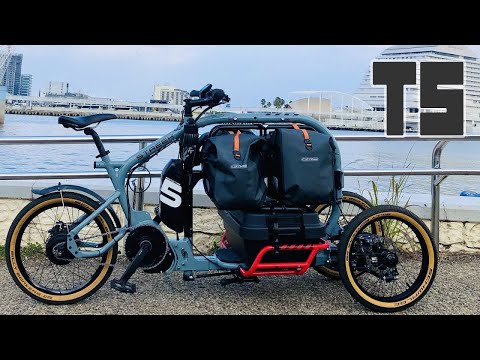