5 All Aboard a Turbo 4 Rotor RX-7 With 1,000 RWHP Driven Hard at the Track
Car video reviews:
Up Next

Japanese Girl Gets Behind the Wheel of an RX-7 Demo Car, Enjoys Drifting It

It's no secret that the Japanese tuning industry has been going through a tough time over the past decade, with so many people these days opting for cheaper Chinese manufactured parts. Even so, the hardcore JDM fans and most of the petrolheads living in Japan still support the industry, which means more great content for us to watch.
11 photos

Japanese people have a fascinating way of going about their business, as you'll see most tuning companies building an impressive demo car and then bringing on a pro driver to test it. Depending on the type of company, you'll either see that car being driven hard during a time attack event, or a drift event, or sometimes over on the touge, as we have frequently seen in the Hot Version videos.

This time we're looking at D'z Garage, which is based close to Mount Haruna, in the Gunma Prefecture. If that sounds only remotely familiar, you should know that Mount Haruna served as an inspiration for Mount Akina, the mountain pass where Takumi Fujiwara from Initial D would practice every night delivering tofu. You can see things that remind you of Initial D almost everywhere you look around the area.

And right outside D'z Garage's we get to see replicas of Han's Veilside RX-7 and Keisuke Takahashi's RX-7, alongside a seemingly huge Lexus. The owner of D'Z Garage has built his whole business around the Initial D phenomenon, and the moment you walk in, you're greeted with a lot of memorabilia that you can buy for your own pleasure. You can get diecast vehicles, food, and drinks, and I've even noticed a rotor housing somewhere inside too.

He knew that many people would gather at the base of the mountain, either just to visit the area or to do actual runs up the hill, and his idea was to provide people with a place where they could get together and enjoy themselves. While there are several RX-7s in the garage and outside, only one is being taken out of the garage for a test. They all look amazing, but this one is probably the most potent version available.

We learn that this comes with a peripheral ported 13B engine with around 550 horsepower on tap, built with grip in mind. They've brought out Sayaka Shimoda to do the driving, and even though she usually slides around in a Nissan S15, she does seem eager to get behind the wheel of the rotary beast. As she jumps in the driver's seat, we see her going sideways almost instantly, with no hesitation at all.

As soon as she gets out of the car, she screams "Fast! Cool!" and continues to praise the car and the exhaust note at the same time. She notes that even though rotaries are not that good with torque in the lower part of the rev range, the moment she entered the power band felt shocking as the car started to lunge forward in an instant. D'Z Garage even went as far as naming this car the Sayaka Special, and she does seem to love that idea! 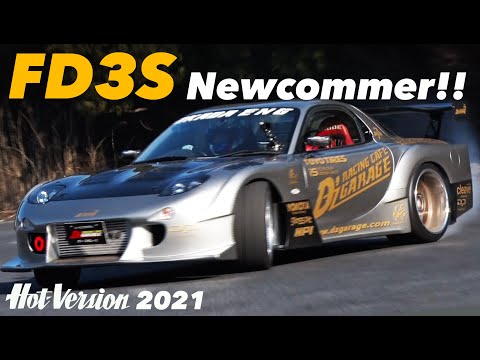