If anybody was going to be sending a robot capable of transforming to the moon, it was always going to be Japan, a country that has long had an intriguing fascination with robots, both from a scientific standpoint, as well as in pop culture.
6 photos

Sure, things "move around" even on conventional Lunar or Mars rovers once they reach the surface, but those are mostly unfolding various bits which had to be tucked during the packaging phase.

What we’re talking about here is completely different – an actual transforming robot co-developed by the Japan Aerospace Exploration Agency (JAXA) and TakaraTomy, the company that created the original Transformers toys.

Dubbed SORA-Q, this tiny mechanical critter, which looks somewhat like the BB-8 droid from Star Wars, will be deployed by a lunar lander that’s already being prepped for an upcoming mission to our closest celestial neighbor.

JAXA partnered with multiple experts from the field of robotics for this project, including researchers from Doshisha University, Sony, and as previously stated, TakaraTomy. The latter were Hasbro’s partners in the early 80s when the first Transformers toy line was created, plus they’re also known for creating toys based on Paw Patrol and Thomas the Tank Engine.

Make no mistake though, the SORA-Q is no toy. Measuring around 80 mm (3.15 inches) wide and weighing in at 250 grams, this tiny droid is about the size of a baseball (or a small Transformer toy). If you’re wondering why a space agency would use a toymaker for such a project, keep in mind that over the years, TakaraTomy has developed countless mechanisms to make things transform.

SORA-Q will reach the moon as part of JAXA’s Smart Lander for Investigating Moon (SLIM) mission, as reported by Gizmodo. Once it separates from the lander, SORA-Q will transform from a sphere to a rover using semi-spherical wheels on each side and a camera unit on top (with lenses facing forward and back).

Other features include a sort-of tail that folds out of the back for balance, plus an offset pivot point for the wheels, turning them into a pair of stubby legs, if you will, which in turn should allow the robot to climb over various obstacles. 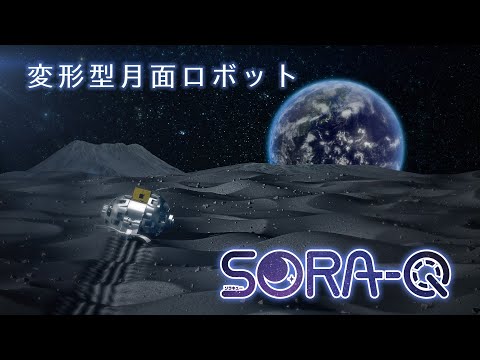