3 This Crazy Contraption Is an E-bike, a Scooter, and a Treadmill

Japan Blows Urban Mobility Away With Canguro, the Most Advanced Partner Android

Cristian Curmei
Ladies and gentlemen, the future of urban and assisted mobility is here. And honestly, who else to lead the way that Japan? No, it’s not just another crazy robot idea. This is real, folks!
14 photos

When I first saw what you now see in the cover photo and gallery, I thought it might be the next robot movie to come from Hollywood. How wrong I was. What we are looking at is known as the Canguro by FURO of Japan. We'll get to know them a bit more later on. For now, let's just stick to their awesome rideable robot.

First off, we know absolutely nothing about what sort of materials went into this heavenly creation. I'm a huge fan of robotics, and seeing something like this, so expressive, so life-like, makes me want to give it a name and take it for long walks in the morning and at night. Oddly enough, that’s kind of the plan.

Canguro is more than just a mobility device that you take with you to work in the morning and back home at night. It’s more of a mobility partner. More specifically, since it's a robot and not just some e-bike or scooter, it will literally follow you everywhere you go. How?

While in robot mode, this vehicle relies on its hardware and software to successfully maneuver around obstacles and streets. On the front of the droid, right underneath those ear-like handlebars, we can see a sort of visor. That's where the vehicle’s 3D Lidar system and wide-angle camera (basically its eyes) are hidden.

As for the software that makes sure autonomous navigation is possible, it uses several programs. A software called SLAM ensures Canguro is always mapping the environment it’s, featuring some of the best real-time localization available. Oh, and it runs both of these features simultaneously, creating a path plan based on the surrounding environment and obstacles in order to navigate on its own. And yes, it will follow you everywhere until you tell it to go home or hop on for a ride.

If you do choose the latter option, as this is its purpose after all, get ready for one heck of a show. Have a look at the video below to get an idea of what is in store for our future. Once you’re done, come back to the text.

When you want to ride this vehicle, it will switch from robot mode to ride mode. This mode engages the pedals, saddle, and general shape of the droid so that it is ready for its human companion. Once on the vehicle, the maneuvering is supposed to be very similar to that of skiing. Using a force sensor in its suspension, the Canguro detects the direction a rider is leaning towards and will lean as well in order to take turns.

Part of the suspension lies in the rear 10-inch wheel, while the two front wheels each house a motor. For now, there's no information on the motors and their output, and I feel that’s how it’s going to stay for a while.

My only worry about all of this is the effect thi vehicle will have upon the human psyche as far as exerting physical effort in any mobility situation. In layman's terms, I'm afraid this sort of vehicle is just going to breed a bunch of lazy humans. Afterall, our brains are made to preserve as much energy as they can while performing bodily functions. Nonetheless, this has got to be one of the coolest pieces of robotics I've seen in a while. 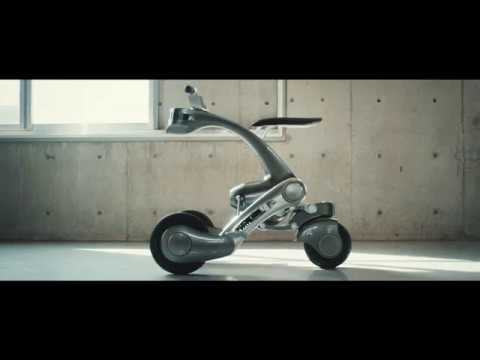