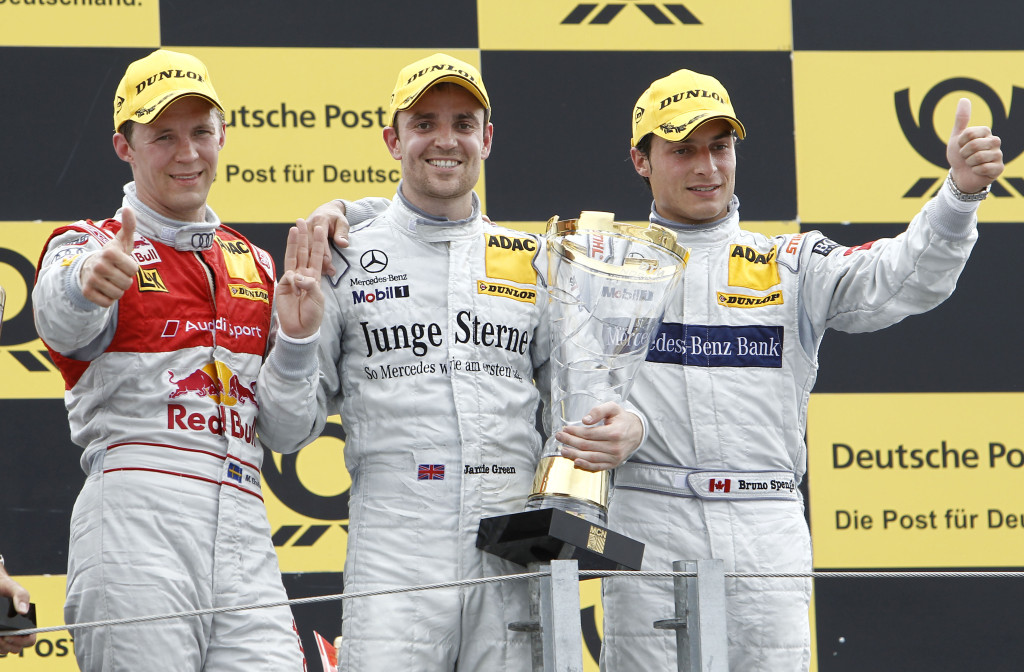 Jamie Green confirmed his favorite status at the Norisring last weekend, as the British driver scored his 3rd consecutive DTM win at this track on Sunday. The Persson Mercedes competitor grabbed an early lead in the race and had to fend off Audi's Mattias Ekstrom later on to score his first victory of the 2010 campaign.

Ralf Schumacher was probably too anxious to start from pole position on Sunday – his first since he joined the series – and jumped it, enforcing an early penalty. This gave Green the lead, which he maintained and actually stretched in front of Mercedes' Bruno Spengler until the final round of pit stops.

At that point, Ekstrom's pit crew worked perfectly to hand the Swede a 2nd place in the race, ahead of the Canadian driver. From that point on, the Audi competitor made several attempts to pass the leader, but Green defended well enough to secure 1st place at the chequered flag. When he rejoined the track from the pits, Ekstrom's disadvantage from Green was up to 5 seconds. In a matter of laps, he recovered close to 4 seconds and kept the pressure on until the final straight line.

Spengler also joined the duo, hoping to get at least one position back in the late stages of the race, but had to settle for the last place on the podium, less than 2 seconds behind Green. The trio drove in a league of their own on Sunday, as 4th placed Oliver Jarvis (Audi) crossed the finish line some 10 seconds behind.

Reigning DTM champion Timo Scheider had to settle for 5th place, a lucky one considering he was trailing Mercedes' Gary Paffett for that position until the final round of pit stop. Like his Swedish teammate however, Scheider managed to jump the Brit thanks to some great work by the pit crew and got one more point in the process.

Alexandre Premat finished the race in 7th place, after being involved in a race incident with Paul di Resta early on, while Martin Tomczyk recovered wonderfully from 13th place at the start – having a sprint to forget from the grid – to grab the only point remaining from 8th place.