1 James May Got To Finally See Hammond's Smallest Cog

4 Richard Hammond Drives a Helicar in Carnage a Trois, to Clarkson and May' Terror

James May Scratches Coworker's Vehicle, Has It Fixed in Hammond's Workshop

While Drivetribe has closed its website, the brand is still alive through its social media channels. As we previously observed, James May likes to pop in occasionally for visits, and that is good news most of the time. The exception comes when James hits one of his coworker's vehicles unintentionally.
7 photos

If something like that happens in the company car park, coworkers usually swap insurance information, or just go run the fleet manager's day if both vehicles involved are company cars.

When personal cars are involved, things are a bit trickier, but this is where it pays to have a friend who owns a vehicle restoration shop, such as Richard Hammond's Smallest Cog.

Somehow, James May managed to scratch Mike Fernie's MG ZT-T with the Tesla Model S he was driving while attempting to park in a tight space.

As James admits, he was trying to prove something, namely his skill at parking, but things have not gone as intended. As a result, James May made a video admitting his mistake, and it is up to Mike to show us how the damage is repaired at The Smallest Cog.

While the MG ZT-T is in Richard Hammond's workshop, Mike Fernie has decided to take advantage of the situation and fix some of the vehicle's underlying problems.

One of them involves the drop links, which presented cracks in their rubber because of age, while the other involves a faulty heater. The latter is essential to have operational during winter, but its use is not limited to the cold season.

The vehicle is also going to receive a fresh set of tires, as well as other small repairs, along with minor improvements. Once everything is repaired, the Drivetribe project car will be for sale on eBay. The auction is set to close on March 6th, 2022.

The 2003 MG ZT-T is a 2.5-liter V6 example that comes with a five-speed manual transmission. Not only was it featured on Drivetribe, but its new owner will be able to pride themselves on having a vehicle that was once scratched by James May's car. 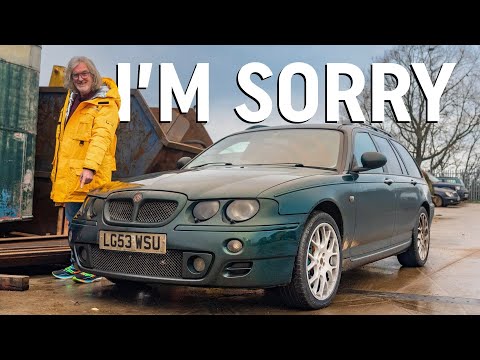 Editor's note: While Drivetribe's video is sponsored, this article was not sponsored or supported by a third party.