1 James May Talks About His 75 MPH Crash That Left Him Hospitalized, Jokes About Insurance

2 The Grand Tour Teases Its Upcoming Episode, a Scandi Flick, It Looks Fun

3 James May Hospitalized After Driving Into Wall at 75 MPH

4 James May Is Our Man in Italy, Official Trailer Reveals He Had a Blast

James May's Crash Video Reaches the Internet, It Is Painful to Watch

James May had an accident while filming the latest episode of The Grand Tour, which is called A Scandi Flick, but this is not news to you. We have known about this for a month and a week now, and the program was made available to Amazon Prime Video subscribers last week. It did not take long for it to be uploaded on the internet.
6 photos

While the story of the crash had already been told by Andy Wilman for IGV, footage of the event was left unseen until the episode went online. Some people have recorded the moment and then posted videos of the recording on their YouTube accounts.

As you can imagine, Amazon will not be happy with this, so those videos will disappear once the online giant contacts YouTube and starts reporting the accounts that have uploaded its content.

The scenes were shot in Norway, at the decommissioned Olavsvern naval base, and James May was driving a Mitsubishi Lancer Evolution 8 at the time. Initial reports claimed that he had been doing 75 mph (121 kph) when he jackknifed into the wall during a braking maneuver, but the video of the crash tells a different story.

While we do see James May accelerating as if he had a grudge against those who call him Captain Slow, and the speedometer does show over 62 mph (100 kph), James is then shown holding the wheel with two hands while hitting the brakes.

The moment of the crash is then shown, and the British presenter was fortunate enough to be able to stay conscious, get out of the vehicle on his feet, and then speak to the emergency crews that were on stand-by for the stunt. The British presenter was taken to the hospital and received a full physical examination before being released back into the wild.

After all, accidents happen, and the saying goes that one must dress for the fall, not for the ride, so we should have seen James May wear a helmet on this particular challenge. Fortunately, the Brit is made it out alive, but scared himself, Hammond, Clarkson, and the entire production crew while he was at it. 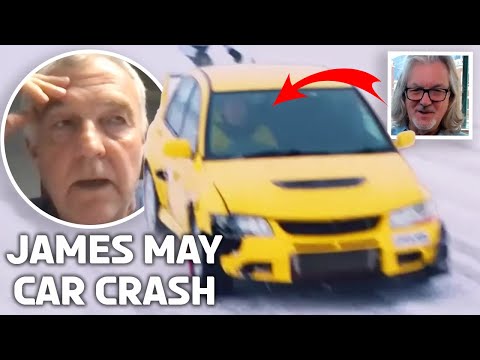