1 James May Is Our Man in Italy, Official Trailer Reveals He Had a Blast

3 James May Scratches Coworker's Vehicle, Has It Fixed in Hammond's Workshop

James May Roasts the Dodge Charger Hellcat, How Bad Is It in Captain Slow's Vision?

Unlike Richard Hammond, who is a fan of American muscle, James May likes his rides a bit less ostentatious, and better built. And he’s willing to pay a premium for them.
8 photos

Over the years, Captain Slow has owned a whole bunch of vehicles, from regular daily models to full-blown supercars. At one point, he held on to a Jaguar long-term loaner for three and a half years, as the manufacturer simply forgot to come and pick it up. The fact that he also changed homes during that time helped, and one day, they just simply came and took it back.

Now, back to the American muscle mentioned in the intro, which is represented here by the big-bad Dodge Charger SRT Hellcat Widebody. This too is a long-term loaner, currently found in the possession of DriveTribe, and it is simply massive for some of Europe’s small roads. It is 120 mm (4.7 in) wider than a Range Rover, and boasts power on par with previous generation supercars, without breaking the bank too much.

Costing the equivalent of £61,000 (~$74,000), the Charger SRT Hellcat Widebody uses the famous 6.2-liter V8. The supercharged HEMI engine pumps out a dizzying 707 horsepower, and at a hard push of the fun pedal, it rockets the super sedan to 60 mph (97 kph) in less than 4 seconds. If you’re into drag racing, then you already know that it can deal with the quarter-mile in under 11 seconds.

Punchy and sonorous engine aside, it is clear that Dodge had to cut corners in order to keep it on the relatively affordable side of the segment. As a result, it features some cheap plastics and a leather interior that wasn’t exactly May’s cup of tea. But what is his overall impression, and better yet, how did he choose to roast it? The answer lies just one mouse-click away. 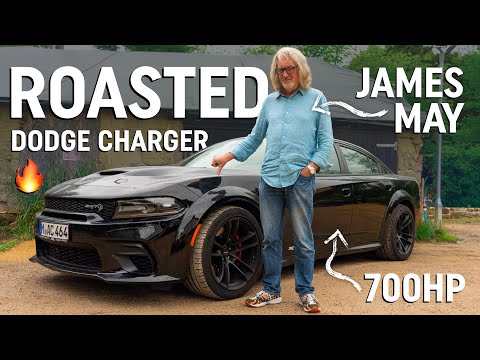