3 1963 Goldfinger Aston Martin DB5, the Most Famous Car in the World, Has Been Found

5 Bond Girl Is a Stealth Trimaran Concept That Lives Up to the Name, Oozes Sophistication
Car video reviews:
Up Next

Home > News > Videogames
12 Jul 2022, 20:34 UTC ·
by Cosmin Vasile
James Bond is not a new theme for Rocket League, but this year is special since the beloved franchise is celebrating its 60th anniversary. Britain’s iconic spy is returning to the soccar game this week, so prepare for some Bond-esque action coming as early as July 13.
6 photos

First off, Rocket League players will be able to obtain James Bond’s Aston Martin DBS, something that has never happened before in the game. Additionally, the iconic James Bond Theme is up for the taking, alongside a Player Anthem.

If you’re aiming to go full 007, you absolutely must get the returning Aston Martin DB5 Bundle or Aston Martin Valhalla Bundle if you don’t already have them. All Bond bundles will be available for purchase via the game’s Item Shop between July 13 – 19.

As far as the latest James Bond bundle goes, this contains some accessories, a player banner, and, obviously, the car. The 007’s Aston Martin DBS is available for 1100 credits, but keep in mind that some of the items below can only be equipped by 007’s Aston Martin DBS (which can’t be customized with other branded content):


It’s important to mention that all players will be allowed to test the new car before they commit to a purchase. Also, the James Bond Theme Player Anthem will be available for purchase for 300 credits.

Just like the newly revealed bundle, the Aston Martin DB5 Bundle and Aston Martin Valhalla Bundle will sell for 1100 credits each. Rocket League players will be able to pick up their favorite spy bundles starting July 13 at 9 am PDT (4 pm UTC) until the end of the day on July 19. 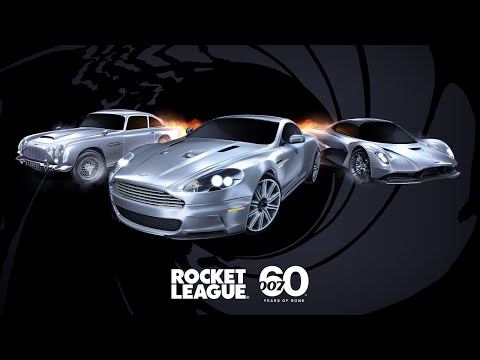