2 Lotus Evija Drifting Is the Highlight of Our Week

Lotus Cars has taken to social media to bring back into attention the 43rd anniversary of the 1977 James Bond feature film ‘The Spy Who Loved Me.’ There is a special reason for that, of course – the tenth installment into the long-running franchise featured a Lotus Esprit S1. That was no ordinary British supercar, though – just like the upcoming fully electric Evija.
27 photos

The plot of The Spy Who Loved Me might have already faded out of popular conscience – it revolves around James Bond’s recurring desire to save the world while on the run from a maniac that wants to establish a new, under-the-sea civilization. Even Roger Moore’s third performance as the titular 007-character pales in comparison to the fame achieved by ‘Wet Nellie’.

That's how the Lotus Esprit S1 was known in the film. It certainly achieved icon-level fame thanks to the movie – and we all know how Elon Musk snatched the actual prop from the production and was inspired years later to deliver the dashing lines of the Tesla Cybertruck. Of course, the Esprit pictured by Lotus with the Evija is not the same.

But we do notice the design similarities – including the eerie white paint – a special request back in the day from renowned cinematographer Claude Renoir. Next to it, the brand-new Evija hypercar is equally stunning. And while it may not morph into a submersible (EVs and water really do not mix) it certainly holds its own next to the 1970s classic.

We have no idea if the Evija has the same tartan interior as the Esprit S1 (though we can imagine one could easily commission such a build) but we do know a thing or two about the astonishing technical details. After all, the Evija is out there looking to battle with the upcoming flagship EVs (Pininfarina Battista, among others).

The Evija is envisioned with four electric motors capable of delivering a maximum output of 1,973 HP, enough for the silent land rocket to reach 62 mph (100 kph) in no more than three seconds and then top out at values above the 200-mph (321 kph) mark. All the while it is not going to run out of juice very fast – the maximum range is projected at up to 250 miles (402 km). 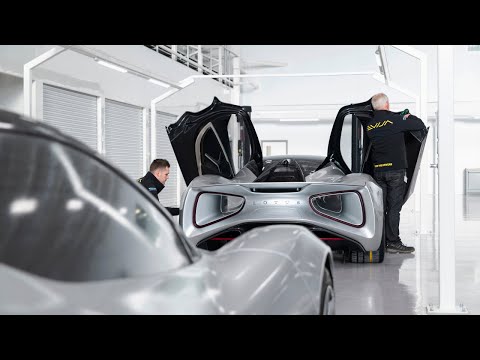