5 Jaguar Consul Launches an Image of Jaguar For the Not So Distant Future
Car video reviews:
Coverstory

Last year, in December, Jaguar announced the image of a vehicle that was aimed to be nothing more than a virtual machine to be used in the upcoming Gran Turismo game, or is it?

Folks, Jaguar is one of those manufacturers that have been around for ages and even grown to be a desired brand of vehicle on six continents: not sure anyone’s driving Jags in Antarctica. With that in mind, whenever this team announces a concept or some sort of car, you’d think that it’s one that will be available to the masses; not the case with this one.

The vehicle you see in the gallery is known as the Jaguar Vision Gran Turismo SV. What it’s meant to be is simply “the latest all-electric virtual race car.” Ok, fine, I'll lay it out for you. Not only is the vehicle to be featured in one of the most coveted racing games around, but it is also...a real car!

Yes, the Jaguar Vision GT SV is a vehicle that does exist and has been built by Jaguar in order to do a full-scale real-world case study on design and everything else that stems from it, not to mention that three different teams worked on this vehicle to bring to life the ultimate electric endurance racing machine.

Wait a minute, endurance racing? But that means... Le Mans! Sure enough, Jaguar states on their website that, indeed this vehicle does have Le Mans heritage and even includes design elements from iconic vehicles like the 1951 C-Type and 1954 D-Type.

So, we’ve got power, but how do you control it safely and efficiently? In order to offer the GT SV a mind-boggling ability to stick to the road no matter its point in a journey, the lithium-ion battery pack is housed low and integrated into the vehicle’s body. This offers a low center of gravity, a low roll center, and “near-perfect weight distribution.”

Thermal management systems are to be enhanced by the addition of liquid nitrogen circuit aimed at prolonging battery capacity and power, while maintaining systems at safe temperature levels. One thing that isn’t mentioned is this battery pack’s capacity, but based on the whole endurance racing aspect, Jaguar is aiming for as much power as possible for as long as possible.

Sure, at this time, we haven’t seen or heard anything else about this sleek EV, but Jaguar does seem to really be bent on making it happen as they’ve even taken into consideration the driving experience from within the cockpit.

One material being explored is known as Typefibre, a “system of performance materials being developed by Jaguar to deliver a lighter alternative to leather.” This fabric was even scheduled to be tested by Jaguar during season seven of the ABB FIA Formula E World Championship.

So far, we seem to still be waiting to see this vehicle in the game, but in real life, the beast exists! The video below shows a discussion regarding the unveiling of the real deal, however, I kind of got a feel that the whole thing isn’t as drivable as we may be led to believe. What about you, do you think this puppy is ready to be raced on a real track, or is Gran Turismo the only place where we’ll see this trinket in action? 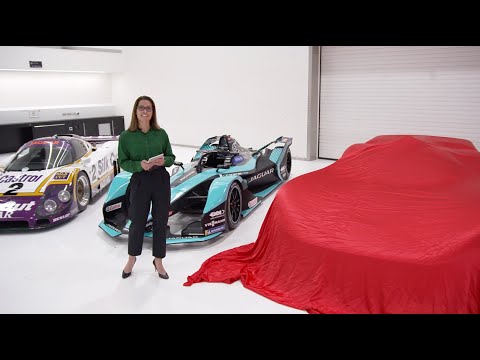