Recently, Jaguar Land Rover must have hired somebody to go over all the world records its cars might stand a chance of breaking. Just recently we had the Land Rover Discovery tow an Australian road train through the outback, and now we get this one involving the Jaguar XF Sportbrake.
9 photos

The British wagon is known to be one of the prettiest such models in the segment, but that doesn't say much in itself - it's like winning the title in the best-looking botched plastic surgery contest. But the Jag brought something else other than relative beauty to the table: its all-wheel-drive as well as Adaptive Surface Response and All Surface Progress Control features that help the vehicle maintain its composure on the slippery ice.

However, I think we can all agree that the one who deserves most of the credit for this feat is the skier. His name is Graham Bell and he's a former downhill Olympic skier for Team Great Britain. He was probably the only one crazy enough to accept a challenge that involved beating the previous record standing at 70 mph (112.6 km/h).

The attempt took place at Jaguar Land Rover's Revi Test Center in the Arctic Circle with temperatures going as low as -28 Celsius (-18.4 F). We can't even begin to imagine how that must have felt while doing 70 mph in the open.

But we don't really have to because the V6-powered Jaguar XF Sportbrake and Graham Bell managed an average speed of 117 mph (188 km/h), smashing the previous record with a massive 47 mph. After the initial nerves had passed once the run was complete, it didn't look like Graham was completely pleased with the result. "Thank you Jaguar," he said upon hearing the official confirmation of his new record for the fastest towed speed on skis. "Next time, we just need a longer track [and] we'll go even faster." 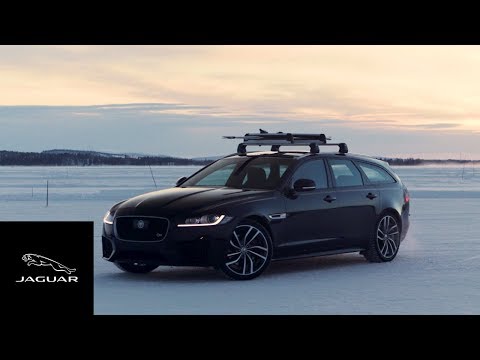