3 Jaguar Recalls ONE F-Type in the US for Airbag Issues, Is It Yours?

Jaguar F-Type Project 7 Has All It Takes to Be a Future Classic, Can Also Be Tame

Jaguar only allotted 65 units of the F-Type Project 7 to its domestic market, and all were spoken for even before production began. Just 250 units were built in total, and that was back in 2015, which is more years ago than we would like to consider at this point.
27 photos

The open-top Jaguar was inspired by the D-Type racing car, and it came with a supercharged V8 motor that provides 575 horsepower and 680 Nm of torque. Even if math was not your favorite subject in school, you can see that it was several times more powerful than a Miata.

The British marque built this limited edition model to celebrate the 60th anniversary of the D-Type, which the company managed to score seven wins at the 24 Hours of Le Mans endurance race back in the day.

Since Jaguar only decided to build a limited number of these retro-inspired vehicles, every unit sold is now worth significantly more than what was paid for it many years ago. Back when it was first unveiled, the F-Type Project 7 had a price tag of GBP 135,000 in the United Kingdom.

As you can see, that was also many times more than a Miata. Back in the day, it was almost as expensive as a Porsche 911 Turbo S in the UK, just to give you a more accurate reference.

When compared to a base F-Type Coupe in the U.S., the Project 7 would start at $100,000 more than it, while it would also be $73,000 more expensive than an F-Type V8 S Convertible, which is its closest relative when regular production models are concerned.

Each unit was built by Jaguar Land Rover's SVO division, which stands for Special Vehicle Operations, and you can immediately see what is special about this model. If you consider all those aspects, this Jaguar is not slow by any means, as it managed to complete a full lap of the world's most demanding racetrack in less than 7 minutes and 39 seconds.

With all that in mind, Jay Emm was offered to review a Jaguar F-Type Project 7 with less than 4,000 miles (ca. 6,437 km) on the odometer. It is the ultimate example of the F-Type, and he got to drive it in both city conditions, as well as in a sportier setting.

As you can see, the F-Type Project 7 has aged well, and it is also surprisingly tame in urban conditions. The latter might be because visibility is good, despite a low-slung hood, and by using an eight-speed automatic transmission. The latter means that you do not have to mess with a heavy clutch pedal, among other things.

The suspension also has multiple settings that allow adjustments to make it more comfortable (within reasonable limits), as does the rest of the vehicle. On top of safety, this is another example of why modern cars are significantly better than the performance-oriented vehicles of yesteryear.

You can drive one of these every sunny day if you like, as well as use it for mundane tasks without struggling. At the same time, without any modification, the vehicle can pull a sub-eight-minute Nürburgring time as long as it is in the right hands. 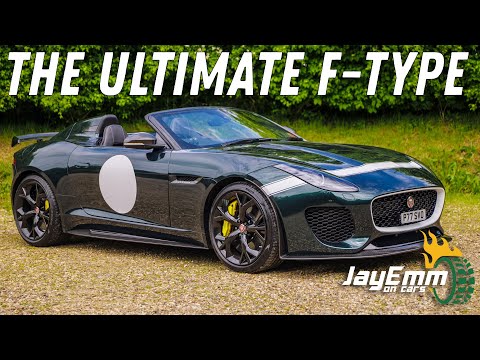