Usually, a Jamboree is a large gathering of Scouts – at a national or international level. But for Jeep, it was the best way to designate with help from a commemorative edition the rarest CJ-7 build in existence.
35 photos

Let’s go back almost four decades, for an instance. As far as Jeep history is concerned, there was no Wrangler just yet. But the American automaker still needed a meaningful way of commemorating the legendary Rubicon Trail, as well as lifting hype for its products in a cleverly-cool way. So, they came up with yet another special edition.

Only this time around, the 1982 Jeep CJ-7 Jamboree wasn’t just something that seemed able to go on a scouting expedition around the entire world. Instead, it became the rarest CJ-7 and most heavily-optioned CJ-series derivative ever in production. And with just 630 examples, it rightfully holds a special place in the minds and souls of Jeep aficionados, right there on par with the likes of 1971 CJ-5 Renegade-IIs.

Interestingly, this Jamboree from 1982 – the Rubicon of its day – doesn't come with a steep asking price from Sherman, Texas-based PC Classic Cars. Which is odd, considering the level of collectability. Maybe it has something to do with the original (repainted) “2H” Topaz Gold Metallic paint scheme, which isn’t as rare as its Olympic White counterpart – of which a mere 70 examples were created.

Or perhaps the fault lies with the previous owner's inability to preserve the CJ-7's originality. After all, this unit does come with aftermarket 17-inch wheels and a nice set of front/rear bumpers to compliment the Dark Brown removable hardtop. But we don’t mind a few sensible upgrades. Especially on a 144k-mile (almost 232,000 km) Jeep.

And the highlights continue to pile up. Inside there are factory-style Black bucket seats, a vintage sound system, factory AC, and even power steering. Naturally, we should also know a little about the powertrain before falling in love with this Jeep. So, under the hood resides a 4.2-liter inline-six with Holley Sniper fuel injection, which is hooked to a five-speed manual transmission and a 4x4 system.

Last, and also least on this occasion, comes the price. Well, the 1982 Jamboree is a refreshingly affordable case of a collectible that’s not asking for an arm and a leg. Just some $32,500, according to the listing. 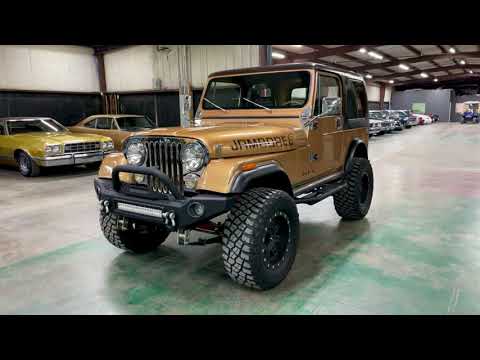