3 The M-House Is a Folding, Fully Relocatable, Sustainable Home – And a True Transformer

5 The Azure 3D-Printed Tiny Homes Are Made With Recycled Plastic, and They’re the Cutest
Up Next

Itaca Is a Self-Sufficient 3D-Printed House for Four People, Whether on Earth or the Moon

Elena Gorgan
Given the amount of funding and effort that go into making space exploration the means to achieve a new human colony on another planet, no wonder people are already tossing around ideas about what said colonies might look like. Here is one of those.
9 photos

Itaca is the latest project from Italian 3D printing company WASP, and it’s currently being developed as an educational project and a test bed for future ideas and technologies. Itaca is a 3D-printed, completely self-sufficient house that would offer accommodation and the resources for a family of four, and WASP believes it would work just as fine as a home on Earth as it would on the Moon. Or maybe even Mars, with the proper adjustments, of course.

The idea behind Itaca is that even the most inhospitable space can be rendered hospitable if the right technology is applied. With the correct systems, any circular space with a diameter of 33 meters (108.3 feet) can be turned into a year-round permanent residence for two adults and two children. Itaca is a good example in this sense, relying on geothermal HVAC, solar panels and rainwater collection to be completely self-sufficient and off the grid.

Surrounded by a green belt, Itaca is self-sufficient when it comes to food, as well. Ideally, this would make it the most suitable solution for housing in areas struck by natural disasters, where land or resources have been diminished, and locals have to make do with whatever was left. It could also work for areas dealing with housing or severe financial issues.

Itaca dreams of a future in which housing is affordable and attainable, and it is both by using 3D printing technology and locally-sourced materials. WASP says that all materials used will be of the zero-kilometer variety, while digitalization will further reduce the effects on the environment, as well as costs.

Itaca has two-fold benefits: it is a 3D-printed construction, and it is an integral part of an optimized circular microeconomy. The latter ensures that residents can live independently and completely off-grid, while also minimizing their carbon footprint and maintaining ecological balance.

“For us at WASP, Itaca represents a step towards food, water, energy, and economic self-sufficiency. For us, 3D printing and digitalization are a response to the needs of humanity,” Massimo Moretti, founder of WASP, says of the project.

The video available at the bottom of the page shows the highlights of the project, and how Itaca would achieve self-sufficiency. If all the specifics have been ironed out, WASP has not made them all public just yet, but the same statement notes that Itaca is a viable concept. To confirm that, the company has already acquired a plot of land outside of Bologna, where the first Itaca home will be built. That is to say, there are plans for more than just one unit.

Moretti notes that, with the proper modifications, Itaca could serve as residence in a colony in space, wherever fate (or Elon Musk) will take humanity next. But before we get ahead of ourselves, the focus is on turning inhospitable areas on Earth into more hospitable ones.

As much as we like to dream of a space-traveling and space-colonizing future, the harsh reality is that life on Earth isn’t getting any easier, thanks to issues like climate change and over-population. A self-contained family unit solution like Itaca would not solve these issues, but at least it could offer a viable means of survival.

The development of the first Itaca home(s) will be part of a larger educational project spearheaded by WASP, a laboratory for innovation and experimentation that will hopefully attract more partners. 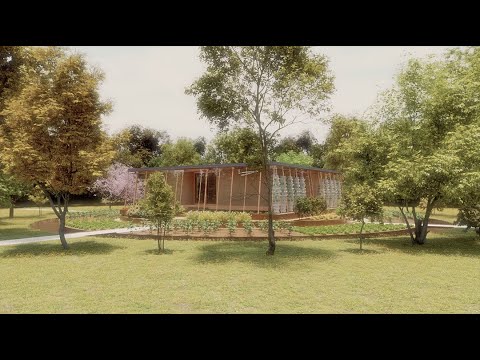