1 Tuned Dodge Charger Drags Shelby GT500 and Hellcats, It Is Quite and Evenly Close

Is This the World’s Quickest Stock Shelby GT500 Over a Quarter Mile?

The 2020 Ford Mustang Shelby GT500 was unveiled at NAIAS in 2019, before going into production later on that very same year. Even today, it seems like a somewhat underrated muscle car, with most people thinking “Hellcat” whenever they imagine the pinnacle of American muscle.
7 photos

To be fair, there’s a good reason for that. Hellcat-branded Dodge models were the first (among their rivals) to offer 700+ hp engines, at a time when the Camaro could only give you 650 hp (ZL1), and this latest Shelby GT500 had yet to be unveiled.

Once Ford did unleash one of its fastest cars ever onto the world, we couldn’t help but be amazed at the specs. The Shelby GT500 is powered by a hand-built 5.2-liter ‘Predator’ V8 engine, on which you’ll also find a 2.65-liter supercharger. Floor the throttle and you’ll send 760 hp (771 ps) and 625 lb-ft (847 Nm) of torque to the rear wheels via a Tremec TR-9070 seven-speed dual clutch automatic.

If you want to argue that the Blue Oval has been misrepresenting the GT500 on purpose, you probably could. There have been multiple instances in which this car has been dynoed at more than 760 hp, and that’s after you factor in driveline power loss.

When it was unveiled, Ford said that it could rocket to 60 mph (97 kph) in 3.3 seconds, before covering the quarter mile in 10.7 seconds. Since then, we’ve seen slightly quicker times, and from seemingly stock vehicles, which is why this recent drag strip run doesn’t really come as a shock.

The car, according to the uploader, is stock, and it might have just put down the world’s quickest quarter mile pass for an unmodified Shelby GT500. When the smoke cleared, this flagship Mustang crossed the line in a blistering 10.28 seconds at 134.66 mph (216.7 kph). That would make this GT500 quicker than a Challenger SRT Super Stock.

Speaking of Hellcats, you'll get to see quite a few of them in the video below, including a stock one that can run 10s. 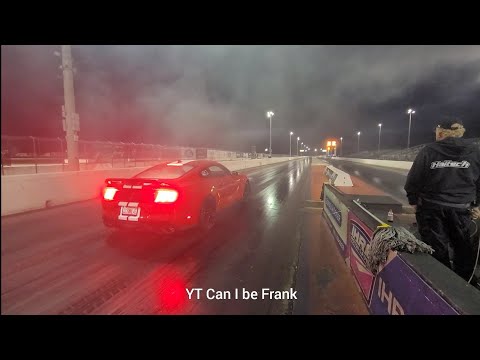