3 2021 Skoda Octavia RS Spied for the First Time as Wagon, Could Be a Diesel

4 Study: Drivers of New Cars Are Annoyed by “Nagging” Tech, Turn It Off

Is the Kia Stinger GT a Viable Golf R Alternative?

As you may have heard, Kia isn't too happy with the way Stinger sales are going and will probably pull the plug in the nameplate. It's shocking, considering how much it's been praised by the media and its fans.
6 photos

At the same time, the Volkswagen Golf R is going strong, despite not being as exciting to look at and packing a smaller powertrain. Of course, it helps that VW is one of the biggest carmakers in the world, and the R is based around a regular mass-market family car. But based on specs alone, it should be demolished by the Korean contender.

The automotive world is full of V6 cars that aren't that fast, as the stock Mustang. But Kia gave its 3.3-liter turbochargers, so the Stinger GT makes a respectable 365-hp and 376 lb-ft of torque. That's noticeably more than the 288-hp and 280 lb-ft the Golf receives from its 2-liter system.

For launching, the two are pretty close in the real world. The Golf R uses a DSG which rockets away faster while the Stinger is faster in-gear. It's amazing. These two cost similar money, yet nobody thought of comparing the.

"But the Stinger is a RWD coupe and the Golf is a FWD hatch. They're not the same at all," we hear you say. Not true, the big Kia is actually a hatchback, a body style that it copied from the Audi Sportbacks or the Porsche Panamera. And when it comes to passenger or cargo space, it's way more practical. And while the AWD system in the Stinger can send a lot of the available torque to the rear wheels, that's actually what you want in a sports car.

For the boring stuff like which one has the best sun visors or satellite radio rewind, we leave you with the full review from TheStraightPipes. If this doesn't convince you to buy a Stinger and secure its future, nothing will. 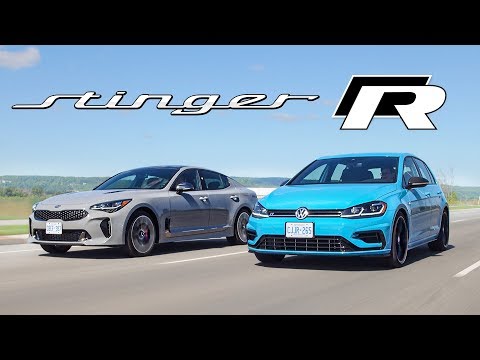