4 I Rode Shotgun in the New Hyundai Ioniq 5: It Changed My Attitude About EVs

Is the Hyundai Ioniq 5 a Safe Vehicle? Here's What the IIHS Has to Say About It

Would you want to be inside the Hyundai Ioniq 5 in the event of an accident? In a single word, that would be a ‘yes,’ as according to the Insurance Institute for Highway Safety (IIHS), this is one safe ride, as it ticks every box in the book.
7 photos

Following in the footsteps of other cars made by Hyundai, the electric crossover has nabbed the highest award. The Top Safety Pick+ applies to vehicles that earn ‘good’ ratings in all six crashworthiness evaluations, including the tricky small overlap front. Moreover, they also have to have front crash prevention systems with superior ratings and at least one ‘good’ or ‘acceptable’ headlamp system.

“As the industry navigates to an all-electric future, we are extremely proud to have been awarded an IIHS TSP+ for our all-new Ioniq 5, the first of three Hyundai EVs to be built on our Electric-Global Modular Platform (E-GMP),” commented the brand’s chief safety officer for North America, Brian Latouf. “Safety is foundational at Hyundai, and earning the IIHS TSP+ award demonstrates our ‘safety first’ commitment to our customers.”

The agency has praised the Ioniq 5’s active and passive safety gear, including its standard front crash prevention system that has scored ‘superior’ ratings in both vehicle-to-vehicle and vehicle-to-pedestrian evaluations. If you want the best headlights possible in this model, then you should go for the SEL and Limited trim levels, as their LED projector clusters have ‘good’ ratings. The LED reflectors in the SE have scored an ‘acceptable’ rating. Also, it is worth noting that the TSP+ award applies to cars made after December 2021, when the Korean company changed the front seats.

A winner of the World Car of the Year trophy, the Hyundai Ioniq 5 is offered in three trim levels stateside, named the SE, SEL, and Limited. Pricing starts at $44,000, $46,250, and $51,100, respectively, before destination, dealer fees, and options, and all of them have a 303-mile (488-km) driving range. They also pack the same zero-emission assembly, with 225 horsepower available via the right pedal. 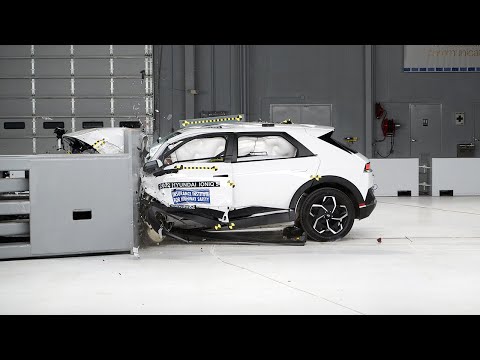