Is the 2020 Range Rover Evoque Better than the Volvo XC40 and Audi Q3?

There's no such thing as a bad premium SUV/crossover, but you can buy one that's bad for you. So let's see how the all-new second-generation Range Rover Evoque compares to two big European rivals, the Audi Q3 and Volvo XC40.
4 photos

There are other models in this segment, like the X1 and GLA. Likewise, you can spend similar money on a French crossover or even a VW Tiguan. But we fully support Autocar's selection for the comparison test drive. The XC40 won 2018 European Car of the Year, while the Audi just looks so good.

In fact, all three of these are big on styling. But what do you guys think of the new Evoque's combination of the old body shape and shape influences from the Velar? Personally, I think both the Volvo and the Audi are more interesting. But the Range Rover best-seller may be a little more interesting on the inside. The leather and double screens just shout "you've bought an expensive car."

The way these three drive is also quite different. The sharp-looking Audi feels the most engaging from behind the steering wheel, while the XC40 is valued for its comfort. So what about practicality. Well, the official numbers say the Evoque has the biggest trunk, but Autocar believes the Audi is better and demonstrates how the opening is wider, thus more practical.

The way the Evoque drives typical of a Range Rover, isolating you from the road and offering predictable responses. NVH levels are good, but the 9-speed automatic is not the quickest, sharpest gearbox. The Volvo has the loudest but also most responsive 2-liter diesel.

So as you can tell, there are things each model does better. But if you're not a German car fan and want a true luxury experience, it's probably going to be in the 2020 Evoque. 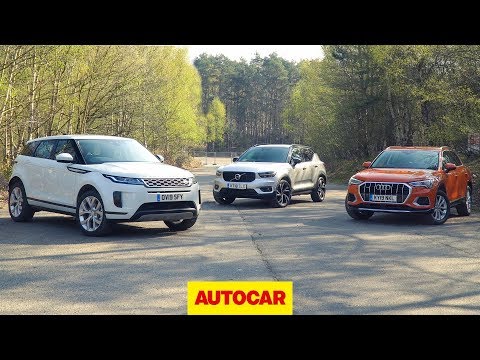