Is It Crazy to Love This Porsche Boxster Turned 1960s Naked F1 Car?

While some Porsche fans might be tempted to scream sacrilege, you better refrain yourself from expressing any dissatisfaction until the end – what we have here is a brilliant feat of engineering coming from a bored college student with a history major. So, give the guy a break because the result – while far from finished, according to his own wishes – is more than outstanding.
10 photos

What we have here is a 1960s-like F1 open wheel racecar project that was born out of sheer imagination, passion, and diligence. Well, the guy does have some technical prowess as well, because on the forum thread where he decided to recount his love story with this Boxster, he also explained he is testing certain components in SolidWorks’ CAD program.

He is not crazy either, specifically telling us he decided to overbuild everything at the expense of weight (although the end result looks quite light). Everything stemmed from his passion for Porsche Boxsters, particularly the 986 generation – he has already owned three examples. The idea was to find the worst unit possible for a donor car – a discreet way of saying he did not want to sacrifice a good example.

His luck came in the form of a 2002 Boxster S with 200k miles and a beautiful set of machined Victor racing wheels, which alone would have cost the same amount as he paid for the entire car. In the video we saw the project came to life in just six short months (jump to the four-minute mark if you want to start from the build), but the description also explains that after eight months of tinkering there is still work to be done.

With the level of fabrication involved – he completely changed some components such as the front suspension design, or the crazy-sounding exhaust – we can imagine our dude will have many months of hard work ahead before declaring his build finished. Still, it is very nice to see the project is very much drivable – you can even jump to the 12-minute mark for some POV action in the video embedded below. 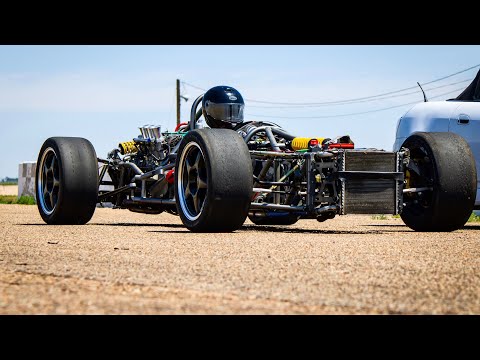