While for many people installing a large tablet like an iPad in a car is something that doesn’t make sense, well, it actually does. And it’s all for a very wide variety of reasons.
6 photos

For example, the iPad has one of the best screens on the market right now, so if you want to watch some videos while you’re waiting to pick up the kids from school, this is an excellent choice.

As a matter of fact, an iPad installed in a car lets you open apps like YouTube and Netflix even when driving, but it goes without saying this is a huge no-no. Such apps are blocked by default on CarPlay and Android Auto, and while they’d make sense when the vehicle is parked, there’s no doubt that keeping them banned when you’re in motion is the right choice.

Another benefit of having an iPad inside the car is the audio quality, as you can use the tablet to play high-res audio and stream it to the sound system in the vehicle.

But because using a tablet holder isn’t by any means a convenient solution given the size of the iPad, audio expert Soundman Car Audio has come up with a more premium alternative. He’s building custom dash mods for various cars, and his latest YouTube upload shows such a project for a Buick LaCrosse.

This time, he’s using a 12.9-inch iPad Pro installed vertically, with the dash also retaining the OEM touchscreen, as well as a DIN-sized opening for a third-party head unit. The configuration is pretty complex, but eventually, the quality of the audio will most likely be top-notch.

Needless to say, the custom dash includes a USB-C port for charging, as well as a convenient sliding system that allows the owner to easily remove the tablet whenever they want to take it home for the installation of updates, apps, or simply to eliminate the risk of theft. 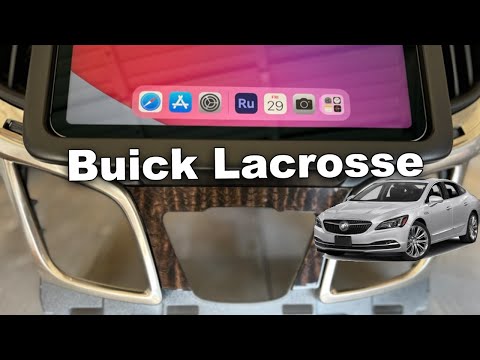