2 It’s Time to Buzz the CN Tower for This F-35A Lightning, And It Does Just That

4 F-35 Joins Two F-16s to Feed Over Alaska, They Make for the Perfect Screensaver Shot

5 Here’s a Pack of F-35A Aircraft Ready for War, Iran Should Read the Fine Print
Car video reviews:
Up Next

As one of the very few fifth-generation fighter planes in existence, the F-35 Lightning is one of the most impressive machines you can come across in the skies of today’s world. The U.S. Air Force (USAF) knows this, and since it lacks any major conflicts to show the plane’s combat prowess, it seems content in advertising the plane’s capabilities any way it can during air shows.
9 photos

The latest such advertisement, recently released by the USAF, comes from Huntington Beach, California, where at the beginning of October the Pacific Air Show took place. As usual, the event was attended by the F-35s own demonstration team.

The upside-down airplane you see here is flown by the team’s commander, Maj. Kristin Wolfe, and is the star of an important moment in the aircraft’s history: it was the first time when the F-35 deployed flares during a public performance.

And we must say, even if we’ve seen this exact plane and this exact pilot in incredible postures over the past year, the image we have here must certainly be the most impressive of them all.

The F-35 started being flown by the American military 15 years ago, so it didn’t really get a chance to prove its skills in combat. The first use of the jet in a military sense dates back to 2018, when the Israeli Air Force deployed them against targets in Syria.

And by the looks of it, it can handle some really extreme maneuvers as well. 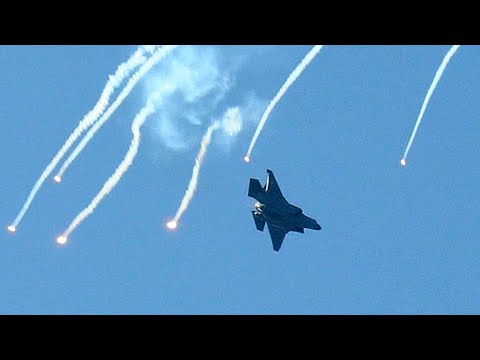 Editor's note: Gallery shows other instances of the F-35 Lightning.