2 Ferrari 488 Pista Drag Races Lamborghini Huracan STO With $50k on the Line, Who You Got?

3 Stage 1 Ferrari Pista With De-Cat Exhaust Screams on the Dyno, Belts Out 796 HP

Although his team has lost the title in Italy's Serie A Championship, the Chairman of the Inter Milan Football Club has treated himself to a Ferrari 488 Pista that was painted in the club's colors. While he is not a soccer player, that did not stop Steven Zhang from being in the spotlight recently.
7 photos

The club, which is referred to as Internazionale (Italian for International), or Inter for short, has the highest game attendance in the country as of 2019, and it is one of the most valuable in the country. Currently, in hope of bringing back the success of years prior in the Serie A Championship, the team is in the midst of negotiations with Chelsea to sign Romelu Lukaku.

The striker in question is meant to complete the new formula of the team along with Paulo Dybala, who has reportedly been transferred from Juventus to Inter for a three-season deal. Curiously, Lukaku had left the Italian club less than a year ago to play in the Premier League but has made his intention of returning to the Serie A clear as daylight.

With that in mind, it was not difficult for the son of Zhang Jindong to decide the roster of the Nerazzurri, which is one of the affectionate nicknames that Italians use when referring to Inter Milano. In case your Italian is a bit rusty, I Nerazzurri means The Black and Blues, and this Ferrari 488 Pista with a custom paint job delivers on that statement.

Other nicknames for Football Club Internazionale Milano include "La Bneamata," which means "The Well-Cherished One" (so it fits for a Ferrari, as well), and the other one is more suited for an Alfa Romeo enthusiast, as the nickname in question is Il Biscione, which is "The Big Grass Snake" or a viper.

The latter represents the coat of arms of the Visconti family, which used to rule the city eight centuries ago. Ever since, companies have taken the "Biscione," which is an azure serpent that appears to either eat or give birth to a human, as parts of their logos. Alfa Romeo is one of those brands, which is why we referenced it.

With that in mind, one cannot help but appreciate the fact that the vehicle is being used instead of being kept in a garage as an investment. On the other hand, this does raise the question if there is a point to daily a Ferrari in a crowded city.

Billionaire Steven Zhang has been spotted in other exotics not that long ago, including a McLaren Speedtail and a Pagani Huayra BC, and that is all within the last three months. So yes, you might say that Zhang might be a bit more relaxed than the average football club chairman. 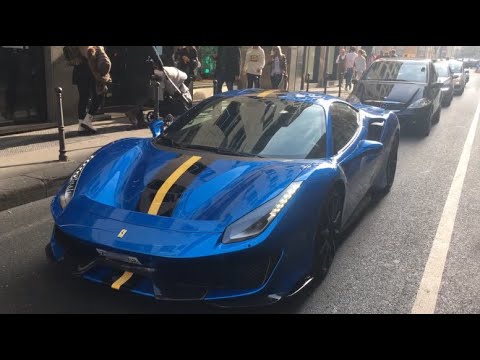