5 Base 2023 Acura Integra Wants to Give You Digital Thrills on a Budget
Car video reviews:
Up Next

What do you think would happen if you brought in 100 random people to choose between a 2001 Integra Type R and a 2023 Integra A-Spec? If any of them have any interest whatsoever in fast cars, they'll most likely choose the old-school sports car. But chances are most of them would go for the brand new car. Looking at the market value of the Type R, that decision would pretty much be less than wise. Because these days the old model can be three times as expensive as the new one.

Integra Drag Races Elantra and Jetta, Then Gets Challenged by a Bronco Raptor With a Twist

The question is, what will happen if they go head-to-head down the quarter-mile (402 meters)? Let's look at the stats for a bit, shall we? Both cars have manual transmissions and FWD.

With more torque and a more efficient drivetrain, it should be capable of holding its own against the older model. Some 15 seconds later, we get our answer. The A-spec is 0.2 seconds faster to the quarter-mile than the ITR.

The quarter-mile challenge reveals the basic math behind this battle: the Elantra N is first to the finish line after 13.8 seconds. The Jetta GLI is 0.8 seconds behind, and we've already seen the Acura at work during the first run. Looking at the trap speed of each car, the Hyundai went up to 105 mph (169 kph), the VW just barely went into the three digits zone, while the slowest one here clocked in at 94 mph (151 kph).

If you're looking for something thrilling to drive with four doors, you'd best look at the new Honda Civic Type R instead. Meanwhile, the Integra has one more grueling test to go through before the day is over. And that's because a Ford Bronco Raptor showed up out of nowhere.

So the producers of the show came up with a twist: the Bronco Raptor will be taking the dirt lane for this challenge. Even so, it looks like it's just as fast with those beefy tires on. At the end of the day, the Integra was only faster than its predecessor, and now we want to test drive the "Braptor" more than ever before. 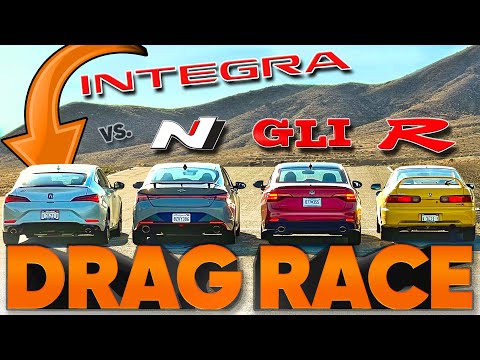