A few years ago I found myself in a sort of predicament. I started buying Hot Wheels products after a long hiatus, and I was at the point where it was a bit too much. Whenever I would leave the house, I would always check for diecast cars at the stores I frequented. I quickly found myself buying hundreds of little cars over a few days.
20 photos

At that point, I decided I had to cool down for a bit. When you realize you've been spending half of your monthly salary on Hot Wheels, a serious reassessment is in order. These things can be very addictive. So I told myself I would only buy certain vehicles that I liked from then on further. I've just bought three new ones: a Corvette C8.R, a 2020 GR Supra, and a 993 GT2. But there are still many left I still need on my shelves.

Yes, shelves. Because if you're collecting Hot Wheels, a single shelf isn't going to cut it after a certain point. Each year, Mattel releases multiple cases, each filled with 72 vehicles. Not every case is going to contain a new cast, but older models do get new paint schemes every now and then. I don't know about you, but I haven't even gotten my hands on all the 2021 models I like. And right now, we get to see the new 2022 - a case with all of its goodies.

Two specials items can be found in random A cases. Hot Wheels fans will know these are called "Treasure Hunt" and "Super Treasure Hunt". The TH for this case is going to be Batman's Tumbler, a cast that has been around since 2006. The STH is a '55 Chevy, finished in Spectraflame Blue with black and silver details. Someone is already selling one of these on eBay for $150, although cheaper variants exist as well.

As with all cases, there are multiple Fantasy cars included. Not everyone is interested in these; most people have them lying around by default and not by choice. The Toyota Corolla AE86 is back for another year, in a different color, but it doesn't look as cool as the Falken one. A blue '85 Chevrolet Camaro is up next, and this one has been part of the line-up since 2012.

The Dodge Challenger drift car is a really old cast as well, and I used to have one in my collection a few years ago. A black 2017 Ford GT is up next. This is always a cool one to have. Mattel also included a black 1967 Mustang and a series of other muscle cars such as a '76 Corvette, a '67 Chevelle SS, and a Shelby Cobra 427 S/C. The only rotary-powered vehicle, in this case, is the Mazda Repu.

JDM fans will be excited about the Nissan Skyline 2000 GT-R too, but I'm more interested in the 2020 GR Supra recolor and the LB-Silhouette Works Nissan GT-R. Yellow looks so much better on the Supra! After Hot Wheels designer Ryu Asada passed away this year, in March, Mattel decided to launch a special mini-segment for the 2022 mainline cars. It's called Ryu's Rides, and the Mighty K Kei car looks like a must-have already!

As part of the HW Turbo series, there's a new Porsche 935 coming up, and you might remember that Jeff Zwart drives one of these in real life! Exotics lovers will be happy to see a golden Pagani Huayra included in the case. I also feel that the new Range Rover Classic is going to be a big hit as it steps in to replace the Land Rover Defender. Which one are you anxiously waiting for? 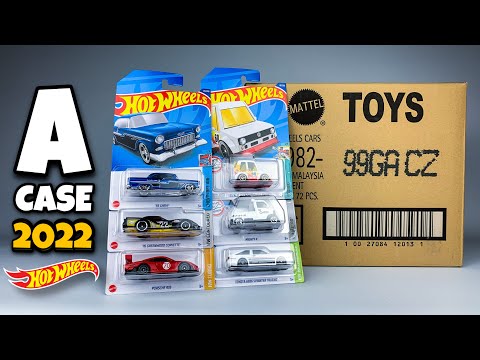