1 2022 Was a Good Year for Hot Wheels Collectors, Here Are All the 15 Super Treasure Hunts

Today I received news that a local supermarket store has just started selling Hot Wheels for the first time. Naturally, I had to go check it out and I was stunned to see they had hundreds of items available. Sadly, I couldn't find anything that I needed, but it's always nice to know that there's an extra place you can go shopping for 1/64 scale model cars.

As you've probably noticed by now, people that live close to the Hot Wheels factory in Asia always get first dibs on the new cars. Some of you might still be looking for the last several cases that have 2022 stamped on them.

But others are already enjoying the second collection for 2023: Case B. You might remember that we analyzed the contents of Case A about a month ago, and we were quite disappointed to see the Tooned Batmobile Super Treasure Hunt. There's a good chance that will be the least desired STH for 2023.

But we're happy to see that we're back in business with Case B, as the second STH model for 2023 is the classic Mercedes-Benz 300 SL. This particular case only has the base model inside, but you still get to see what the Spectraflame Red version looks like.

You'd think that a classic car such as this one must have been part of Mattel's line-up for decades now, but that's not the case. It was introduced in 2020, as part of the Car Culture: Team Transport series.

We've only seen seven iterations of this vehicle before and most of them were premium models anyway. There are quite a few sellers from Malaysia that have listed this item on their accounts, and some are asking as much as $135 for it already.

Moving on with the Regular Treasure Hunt model, we're faced with the second fantasy vehicle for 2023: the Surf Crate. This casting is more than two-decades-old at this point, and it has been featured as both a TH and an STH before.

Overall, Case B doesn't feel as exciting as the first one, but we still tried to find some exciting parts about it. It's good to see a new color for the Dodge Van, a relatively new casting that was also featured as an STH in 2022.

We're not quite sure about the orange windows and see-through roof, but other than that it's not bad at all. Kool Kombi fans will be ecstatic to see the new yellow version and there might be a Premium version of it coming in the Car Culture series too.

The Bentley Continental GT3 wasn't part of the 2022 line-up, so it's good to see it's back for 2023. This is the third variation of green used by Mattel so far, with a total of five iterations on the market since 2020.

The Nissan Maxima Drift Car was a big hit the instant it showed up this year, and it's only natural that Hot Wheels would want to replicate that success. The Motul decals are now gone, and the car features a red paint job with white stripes. You can still have a peek inside the engine bay, and the Maxima sits on the same Super Advan-inspired wheels as before.

We aren't going to talk about the items that have already been a part of Case A, but we will mention the fact that the black Nissan Silvia S15 is back again for the second time in a row.

That car is bound to stir up quite a fuss, as it's one of the best-looking mainline vehicles money can buy. If you blink you might just miss the Rally Speciale fantasy car, which happens to be a modern replica of a Group B rally car. This is a brand new casting for Hot Wheels, and it would certainly be nice to see some WRC items shrinking down to the 1/64 scale.

Dig deeper and you'll also come across the fourth iteration of the 2023 Nissan Z, now finished in a dark shade of blue called Seiran Blue just like the real car. But we're sure that more collectors have been eagerly waiting to get their hands on the Tesla Model Y instead.

Finished in Metalflake Pearl White, it sits on 10-spoke wheels. It happens to be the seventh Tesla model to be licensed by Hot Wheels, and that number will only increase within the next few years.

The highlight of Case B has got to be the Volvo P1800 Gasser. This brand new casting is a replica of "Ain't No Saint", the car that won the 2021 Hot Wheels Legends Tour! We spoke about this vehicle earlier this year, and we mustn't forget that the 2022 edition of the Tour is still ongoing.

We are going to end our analysis by saying that the newest version of the 1980 El Camino almost feels like a premium model! This item is part of an '80s mini-collection, and there are seven more cars to be discovered here by the end of 2023. 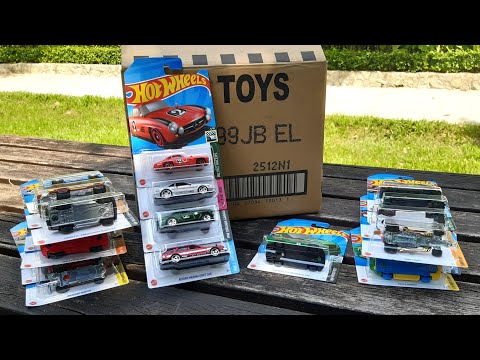