2 Inside the 2022 Hot Wheels Deutschland Design Set, a Perfect Gift for Diecast Enthusiasts

Believe it or not, it's already March of 2022, and that can only mean one thing. A new Hot Wheels case is on its way to retailers around the world. We're at Case H right now, and it's exciting to see the novelties that Mattel has in store for collectors of all ages. We've seen some pretty cool models so far, but we're bound to get some new castings soon.
27 photos

The rare items for this case are the 2020 Jaguar F-Type Super Treasure Hunt and the Morris Mini Treasure Hunt. As you'd expect, there will be a limited supply of these two vehicles. But if you won't be lucky enough to find them in stores, there's always eBay, albeit at a much higher price. As with all Hot Wheels cases, this one is also made up of 72 items, some of which are real-life replicas, while others are Fantasy cars.

Although it has a nice, classy feel to it, the '57 Chevy isn't the most exciting car of this new case. But we do have to acknowledge that it's one of the oldest running models, as it was first launched in 1977. The VW Kafer Racer was featured as an STH in the previous case, so there's nothing new to see here. Most people will likely love to get their hands on the GMC Hummer, so it's good to see it here for the second month in a row.

If you think the 1947 Chevy Fleetline is a new addition to Mattel's line-up, you probably started collecting Hot Wheels less than 6 years ago. The last time we've seen this model was in 2015, at a point where it was already 11 years old. If you've read my previous stories, you'll probably know that I'm a big motorcycle enthusiast, but somehow the Hot Wheels motorcycles don't feel as exciting to me. The BMW R nineT Racer is new for 2022, but getting a motorcycle right isn't that easy at this scale.

If you didn't get your hands on an Evergreen Mazda RX-3 yet, now is your chance. It's not as nice as the Car Culture variant, but then again, it's much cheaper too. The green Volvo 850 Estate is back again as well, but you can't help but love an iconic wagon like this one. The Morris Mini TH has been around since the year 2000, and last year it was part of the British Horsepower Car Culture set. The Ford Mustang Mach-E 1400 is back with a new color. The SEMA livery would have been nicer, but red is going to have to do for now.

For those of you that are fans of the Mud Studs series, you'll be happy to see the Range Rover Classic, now featured in blue and black. There are quite a few EVs included in Case H, Mach-E 1400, and GMC Hummer aside: the Tesla Roadster, the Lucid Air, and the RS e-Tron GT! While Fantasy Cars usually tend to be less exciting, you can't help but notice that there's something special about the Dimachinni Veloce. It does resemble the DeTomaso Pantera in a way, while some people have noted that it's similar to the Lamborghini Jarama too. All in all, Case H has a decent variety of cars, but it's not going to be the most memorable one in 2022. 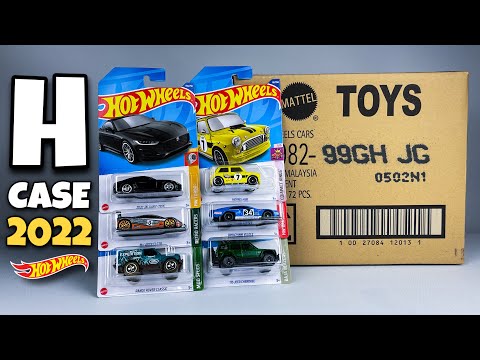