2 Icebreaker La Datcha, the Explorer Yacht With 40 Days of Autonomy

In late 2018, Italian fashion designer Roberto Cavalli took delivery of his own superyacht, an all-black, ultra-sleek and very fast CCN build he named Freedom. It’s the most glam-chic boat you’re likely to see.

Inside Roberto Cavalli’s Superyacht Freedom, Inspired by the Batmobile

We all know that fashion people (and not just designers, almost everyone involved in the high fashion industry) tend to verge on the eccentric, but nowhere is that more apparent than on board Cavalli’s yacht. Freedom was built from scratch with input from Cavalli and you can tell: it’s glamorous, it’s opulent and it’s shiny. It’s also very fast and small, almost intimate – if you can call a 92-feet, 3-room superyacht that.

The inspiration for it was the overall aesthetics of the Batmobile, so if you ever wondered whether there’s a Batman-inspired superyacht out there, why, yes, there is. However, while Freedom brings to mind imagery usually associated with The Dark Knight, all that disappears once you set foot inside. As they say, business in the front, party in the back.

Build by Cerri Cantieri Navali on a design by Tommaso Spadolini (Cavalli’s good friend, who worked with the owner throughout the project’s entire gestation period), Freedom has 2 decks and accommodation for more than 6 guests and crew. Compared to other celebrities’ superyachts, this one feels small but that’s only because the Italian designer wanted it this way.

Believed to have cost $20 million, it was initially supposed to include only the master suite, but Cavalli had a change of heart and agreed to two more guest rooms, one twin and one VIP suite, situated near the galley. The master cabin is on the top deck and is typical Cavalli: a combination of animal prints, leather, metalwork, mirrors, shiny surfaces and gold accents, with plenty of natural light coming in through a skylight and vast windows. It could be an eyesore, but it works.

“Everybody knows me for my animal prints – leopard and zebra. In this boat, our bedroom is covered in leopard print,” the designer says in an interview with Boat International.

The master cabin has direct access to a lounge / beach area and a small flybridge deck, for extra privacy. It also has access to the wheelhouse, because Cavalli often drives Freedom himself.

The guest cabins are also furnished with items from the Roberto Cavalli Home collection, in the same flamboyant and glam-chic style, but they feel somehow restrained. At least compared to the master cabin. They also feature animal prints and metalwork, but go easy on the mirrors and the sheer number of decorations.

By contrast, the kitchen is a clear oasis. Cavalli tells the same media outlet that he personally loves to cook, so he created a space where he can feel comfortable, along with anyone else who might join him. The walls are covered in pictures of a summer sky with little puffs of cloud, taken by the designer himself.

There’s an indoor dining area adjacent, but the more impressive and considerably larger dining area is outdoors. Protected by the elements by two expansive panels of glass (branded with the Roberto Cavalli logo, of course), it offers comfortable seating in the same furnishes with animal prints and leather.

The garage sits at the bow, with room to store a 12-foot tender. Cavalli isn’t so much into watersports as he’s into speed: he says he loves nothing more than passing other boats, so he made sure his superyacht could do just that. Thanks to three Rolls Royce water-jet marine engines, Freedom can reach speeds of 42 knots (43.5 knots on technical sea trials) and cruise at a more leisure 30 knots.

Freedom’s unusual design and aggressive lines helped it win Best Exterior Styling and Best General Arrangement at the 2019 Boat International Design & Innovation Awards. The combination of eclectic styles make it a stunner, both inside and out. This is a superyacht that’s surprising and, to say the very least, memorable – the perfect fit for fashion industry’s biggest rebel. 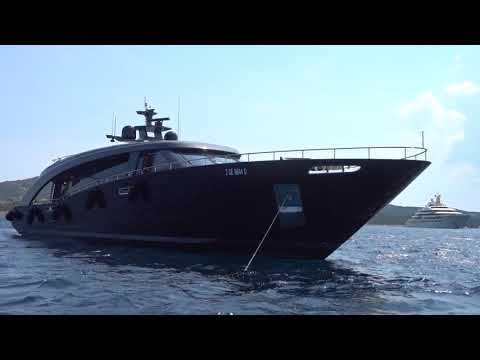