3 A Short Story of the Most Valuable BMW 507 in the World: Elvis Presley’s

Back in the '50s, BMW wanted to storm the U.S. market with this sporty roadster that catered to the wealthy clientele. The selling price was so crazy-high that only 254 were sold, almost bringing BMW into bankruptcy. The good thing is this rarity makes the 507s ever so precious and almost impossible to find on the market. This is why this 1958 Series II example is a steal at $2,450,000.

Austrian importer and consummate salesman Max Hoffman was the one that convinced BMW management they could offer a sports car to wealthy Americans. Hoffman was a visionary and saw the American sports car market as an opportunity.

Unfortunately, costs spiraled out of control, and the car that was supposed to cost $5,000 sold in the end for a staggering $10,000. No wonder BMW could not sell more than 254 units of this extraordinary car, cherished by celebrities like racecar driver John Surtees and rock-and-roll icon Elvis Presley, who purchased two 507s.

The car was entirely handcrafted, which explains the crazy price tag, and was built with the finest mechanical components derived from the 502 and 503 series production BMWs. The original overhead valve 3.2-liter V8 aluminum-block engine, outfitted with twin carburetors, delivered 150 hp in a light and nimble package that allowed it to outperform many sports cars of the time. But it was the roadster design signed by Count Albrecht von Goertz that got the 507 to such iconic fame almost immediately after its release.

Production was divided into two stages, with the Series II cars being favored by collectors. The updates included more passenger room due to the relocation of the fuel tank, a revised dashboard, and a more streamlined convertible top stowage area. The most desirable mechanical and safety improvement in Series II cars was the addition of Girling front disc brakes.

Being so rare, the BMW 507 is a highly sought-after classic car, but most of the time it's impossible to find one. That’s why we consider ourselves lucky to come across this 1958 BMW 507 Series II in pristine condition. The car looks and drives like new, as it was the subject to an extensive restoration at BMW Classic carried out between 2006-2008. The car later was inspected and certified by BMW Classic in 2014 when it gained its “Black Book” certificate.

Whoever grabs this ultra-rare 507 will find this has a factory-replaced 140 series engine with eleven-bolt cylinder head castings in place of the original ten-bolt engine design of earlier iterations that was prone to heat failure. The engine starts and runs smoothly according to the Hemmings listing, and the video below shows this 507 is a wonderful car to drive.

This BMW 507 example retains the original chassis, original suspension components, the original braking system (including the Series II Girling disc brakes), and original body panels. The car also rides on a complete set of the impossibly-rare Rudge knock-off wheels, which are identified in the BMW Expertise report to be original and correct. Under American ownership for the past five years, the car has only been displayed at one premier Concours event, The Quail Motorsports Gathering in 2016.

Among the people who enjoyed this beautiful car throughout the time, we count Gustavo Zingg, a German businessman who also served as the official representative for Mercedes-Benz in Venezuela, and Ludwig Hahn, who passed the car on to Nicholas Hahn. In 2005, this 507 was offered for sale by Erich Benz and subsequently purchased by Jan Onne, followed by Phil White in 2016. Now it can be yours provided you find the needed $2,5 million stashed in one of your coffers. It’s not much, considering how exclusive this car model is. 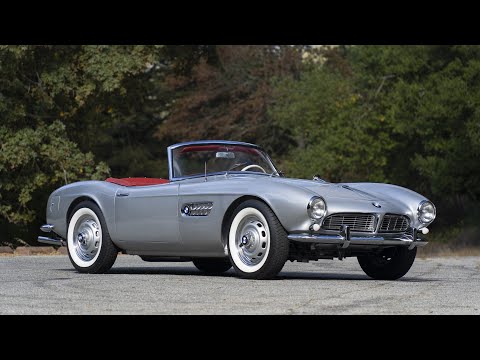