Insane Roush Mustangs Turn on Each Other in 1,500-HP Drag Race

You can sometimes predict the outcome of a drag race if you look at the spec sheets of the vehicles involved. But what do you do when we're talking about cars that seem to be identical? The driver input will most likely be the deciding factor. But we shouldn't neglect the potential differences between the cars, no matter how insignificant they may be.
14 photos

We usually enjoy seeing cars built by different manufacturers going head to head down the quarter-mile (402 meters). That way, we can get a sense of hierarchy, and we can decide on our favorites. But today we're looking at two nearly identical Ford Mustangs that are about to drag race somewhere in Australia. Both cars are sporting Roush Stage 3 superchargers. And that brings their specs up to 750 horsepower and 670 lb-ft (908 Nm) of torque.

That's just a little less power than what you get with a Shelby GT500, but more torque. Looking at both cars you start noticing the things that set them apart. The plain-grey one -let's call it the Roushcharged version- comes equipped with the TVS 2650 supercharger, but that's about it. The Mustang with the decals on the side has the full Roush Stage 3 treatment, so let's reffer to it that way from now on. That comes with more efficient cooling and a Roush-tuned suspension, among other things. So we might have a winner already.

For the first run, the Stage 3 Roush Mustang takes control of the race as soon as they launch. And even though both cars have the same power and torque levels, you have to account for all the differences between them. So the lesson here is don't cheap out by only getting the supercharger for your car, get the whole package! We get to see a second run, and this time the Stage 3 Roush struggles with wheelspin going off the line.

But as soon as it grips up, it jumps ahead of the Roushcharged Mustang and wins once again. For the third run, the winner gets a new set of Mickey Thompson ET Street radials. I guess it would have been even more interesting to see the other car switching to these tires. This way, we would have seen if the added grip can compensate for the slower setup. The two cars also switch lanes and given the situation the Roush Stage 3 Mustang should be able to obliterate its opponent in a blink of an eye.

With no prior burnout to bring the drag radials up to temperature, it does seem like the car wants to go sideways a bit. But it gets back on track and rockets across the finish line, obviously in 1st place. We get to see the Roush Stage 3 Mustang going for a solo run, with telemetry in place. Now, Roush has advertised this package as being capable of running the quarter-mile in 11.2 seconds.

Their car should also be capable of hitting 60 mph (96 kph) from a standstill in 3.6 seconds. The car in today's video was just slightly slower, crossing the quarter-mile finish line in 11.7 seconds. It also managed to reach 62 mph (100 kph) in 4 seconds. The Roushcharged Mustang is about half a second slower in both situations. The end of the video provides a bonus rolling start run, and you don't have to be an drag racing genius to predict who's going to win. 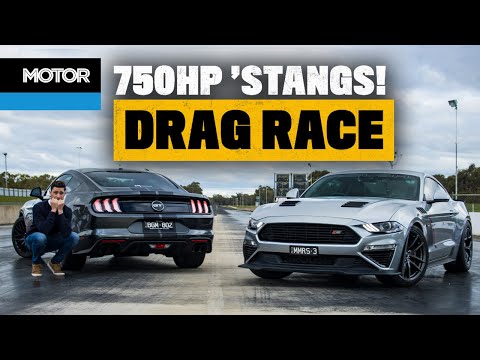