Aurel Niculescu
Come November, one of the last surviving members of the proud North American mid-size sedan segment will proudly showcase all of its next iteration goodies.
8 photos

If you are a Honda fan, then you already know that we are talking about the eleventh generation of the best-selling Accord nameplate. If not, let us remind you that not long ago, the Japanese automaker released a rather revealing teaser (at least as far as the front and rear exterior POVs are concerned) showcasing the 2023 Honda Accord in Hybrid Touring grade form.

They also promised that all details would be spilled by the OEM sometime in November. But, of course, even as the mid-size North American sedan is losing the battle with the crossover, SUV, and truck counterparts, some people are quite eager to check out the goodies well in advance. No worries, though, as Dimas Ramadhan, the virtual automotive artist behind the Digimods DESIGN channel on YouTube, has taken up the task of revealing the new Honda Accord – albeit only in CGI.

No less than ten generations have passed since Honda first introduced the Accord nameplate, back in 1976. The first three iterations were, actually, way smaller than anyone can imagine and occupied the Civic’s current rightful place as the compact car representative from Honda. Starting in 1989, the Accord was leveled-up to the contemporary mid-size attire but only featured an evolutionary styling at the time.

Well, frankly, that design trait stuck across the board, and there are way more subtle generation changes than all-out revolutionary departures from the norm. More of the same is probably going to happen with the tenth and eleventh versions, at least according to the teasers and this digital impersonation.

Alas, do take all this with a grain of salt, as always – at least until the Japanese automaker finally spills the beans, and we can finally compare this virtual Accord with the real one. 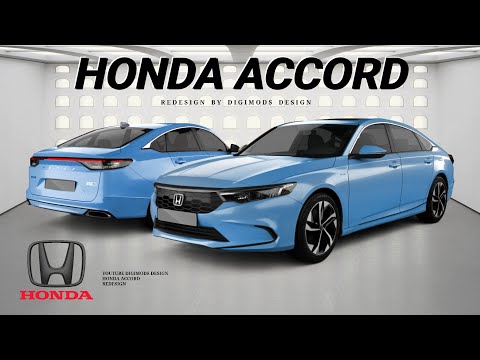