Home > News > Concept Car
Mihnea Radu
There have been a few pigs over the years, but Infiniti's coupes are usually quite sporty looking. However, the new Q60 Concept, which is likely to reach production in a couple of years, is a masterpiece.
88 photos

The Q60 draws inspiration from both the Q50 Eau Rouge and the Q80 Inspiration concepts. It plays at the same design game as the BMW 4 Series, offering more aggression than the regular sedan version it is based on.

If the new Infiniti naming strategy has you confused, know that the Q60 is actually the replacement for the old G-Series coupe, which is still in production. The platform will be shared with the Q50 sedan and the engines… well, that's where things get interesting.
A brand new V6 twin-turbo
Under the bonnet is a brand new 3-liter twin-turbo V6 with direct injection. It's been years since Nissan has built a brand new V6 engine and this one is intended for mass production so, finger crossed, we could have a potent rival to the BMW 4 Series and the new Merc' C-Class.

The company hasn't specified any specific output numbers yet, but it's the same engine they previewed last year in the Q80 Inspiration Concept. There, it offered 450 horsepower before also receiving help from a hybrid system.

With that much power, the Q60 would be a relevant rival to the BMW M4. Infiniti has tried and failed to take a small slice of the performance coupe market with the IPL models, short for Infiniti Performance Line. They also planned to build the Q50 Eau Rouge sedan in limited numbers, but the latest reports suggest that could be scrapped.

Could the Q60 take over from the Eau Rouge? Maybe. We can, however, tell you with 90% certainty that there will be other engines, especially in Europe and Japan. Infiniti has license to use a pair of four-cylinder turbo engines from Mercedes, namely the 211 PS 2.0 gas-burner from the C250 and the C220 d's 2.1-liter diesel-burner.
Mercedes styling cues 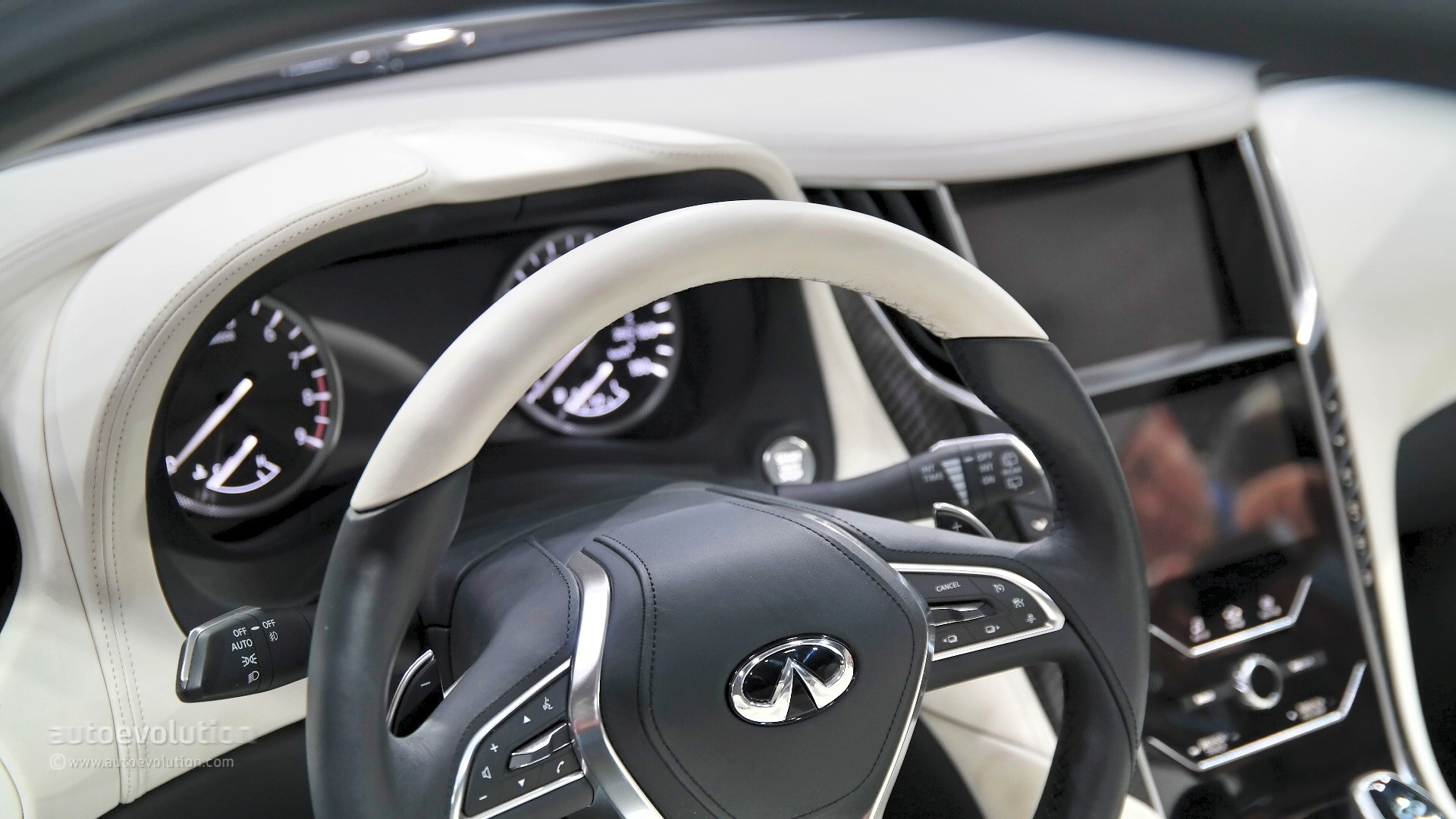 We know the Q60 was probably designed by many bureaus, including the new one they established in Beijing and the ones in London and San Diego. But we can't help feel that they looked at what makes a Mercedes-Benz premium and copied it. For example, the Infiniti badge glows in the dark, just like the German star.

The seats also struck us as being similar to the quilted leather bolsters offered by Mercedes and, to a lesser degree, by the Audi RS7. They've kept the Q50's drive-by-wire steering and adopted an all-touchscreen center console as well. Both these features are likely to be controversial ones.

The Q60 is a no doubt a concept car, but in Detroit, Infiniti has expressed interest to keep as many of the features as it can when it enters production at the Tochigi plant in Japan some time in 2016. The convertible version should follow a year after that.