Never give up, especially when fate shows the ultimate goal to be just a whisker away. Or, in this quarter-mile case, some 3/1000ths off... Alas, such are the infinitely entertaining dragstrip stories.
38 photos

Sometimes you win some, other times you lose some. But here is an example of when both are possible at the same time. The videographer behind the Drag Racing and Car Stuff channel on YouTube presents us with Bonnie & Clyde Racing’s Infiniti Q50. It was filmed a couple of nights at the strip. And during conversations with the owner of the car, a lot of cool details perspired about its solid 10s passes.

As it turns out, the team and their silver Q50 (showcased in the channel’s latest video embedded below, as of February 14th, 2022) are gunning for the stock turbo world quarter-mile record. That one, according to the description, stands at exactly 10.611s. Do keep that longer figure in mind because it is going to be extremely relevant soon.

The action takes place at the Bradenton Motorsports Park in Bradenton, Florida, over a couple of nights. As such, we are sorry for the grainy footage. This neat Q50 would have deserved better. Alas, it did have a lot of moments to shine through the bad camera focus. The first race saw it start a brawl with a fellow Infiniti Q50, and it is a good perspective (10.85s to 11.91s victory) as to what happened next.

Then, from the 0:48 mark, we expected a bit more action from the white Caddy. Alas, it was not the case, and the Q50 delivered an improved 10.82s pass against a truly meager 13.6s run. Consistently improving, this Infiniti gave out one solid representation after another, nailing two 10.79s wins in a row, one of them (at the 1:55 mark) against a 12.55s Chevy Corvette.

But the moment that should have been the one to remember comes at the 2:16 mark. This is when the silver Q50 almost hits the ultimate goal of securing a new world record in its category. Still, there is more work to be done, as it shied away from the mark with an incredible 10.613s pass! Now, the rest of the nine-minute-long story is details... 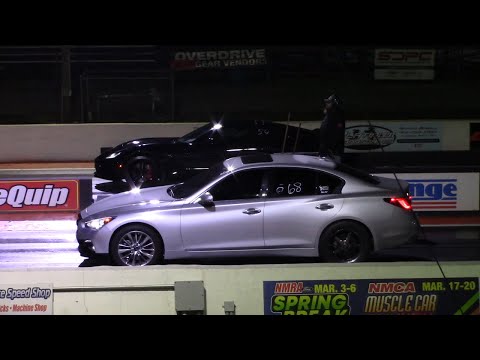