This drag race doesn’t have a fine piece of America muscle in it, nor does it feature an exotic supercar or some import that’s all hopped up on nitrous. What it does have are two direct rivals from the executive sports sedan segment, with similar power and torque levels when stock.
6 photos

It’s as fair a fight as we’ve seen lately, and we’ll show you just how similar the two are on paper in just a moment. Before all that, we should mention the fact that Jaguar has pulled the XE from the U.S. market, whereas the Q50 is still available to purchase from your local Infiniti dealership. Jaguar Land Rover decided to focus on crossover models mostly, which led to the XE’s unfortunate departure from the States.

Now, just because it’s gone, doesn’t mean it’s also forgotten, and after watching this race, we’re happy to announce that there’s still plenty of bite left in that old girl. The Jaguar XE 35T is powered by a supercharged 3.0-liter V6 engine, mated to an eight-speed automatic gearbox. It produces 335 hp (340 ps) and 332 lb-ft (450 nm) of torque and will get you from zero to 62 mph (100 kph) in 4.9 seconds.

Thanks to a custom exhaust / intake setup, it should be putting down a little extra grunt, but not by any considerable margin.

On paper, a stock Q50 3.0T isn’t a lot slower than the XE 35T to 62 mph, with Infiniti claiming a time of just 5.2 seconds (so a mere 0.3 seconds off the mark). In the real world however, things don't always go as "planned". The Jag took this one pretty easily. 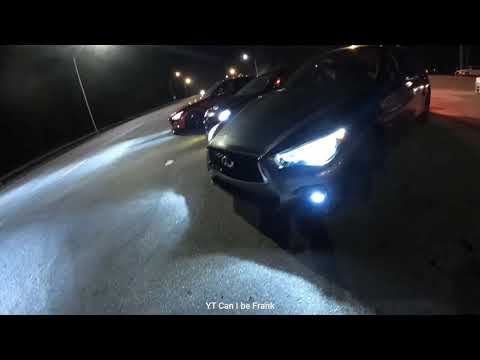