3 The Infiniti Cybertruck Rival Looks Like a Cool Land Yacht

Infiniti Cars Made of Paper Are the Ultimate Origami Exercise

It’s been centuries since people in Asia first became masters at folding pieces of paper into incredible shapes. This art form, made popular by the Japanese under the name origami and technically within reach of everybody, is still drawing crowds.
5 photos

Now that a good chunk of the world’s population is stuck at home, origami has definitely become a favorite pastime for many. Using templates or simply letting imagination run wild, we’re confident people came up with incredible origami artwork over the past two months. Artwork we'll probably never get to see.

Separately, in the auto industry there’s little to talk about these days, with most of the world’s assembly facilities still closed and sales in tatters. So carmakers are bored too, but they also need to keep the public entertained and alert for a time when all of this will be history.

Enter Carigami, a form of origami exclusive to Infiniti. So exclusive, in fact, it didn’t even exist until this week.

We must hand it to Infiniti, we’ve seen some crazy boredom-born stunts made by carmakers over the past few weeks, but this is new.

Sometime in the very very near future, Infiniti will provide those interested with printable origami templates for three of its models, the Q50, QX80, and FX crossover. Anyone can download them, print them on a sheet of paper, and then cut and glue the different pieces together until a paper, 1:27 scale replica of the cars is formed.

The templates can be downloaded at this link (at the time of this writing, only the Q50 is available) and the finished project can be seen in the gallery above. Infiniti wants of course to see the results of work done at home by each of those interested in doing origami in these times of global boredom, and launched the #Carigami hashtag on its social media channels. 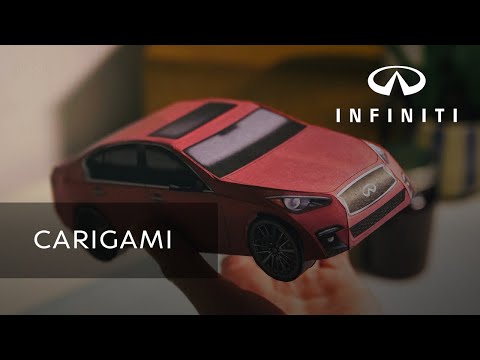