2 The Huge Difference a Couple of Seconds Make When Riding

3 Never Underestimate How Mindless Jaywalkers Can Be

4 Walking Away from Such a Crash Is Almost Surreal

5 Why Testing Your Luck as a Rider Against a Truck Is Bad for Your Health
Car video reviews:
Coverstory

Don’t know why people believe scooters are easy to ride and anyone without training can hop on one and is ready to go like second nature, but there are a lot of them and they inevitably learn it the hard way that these things can be as dangerous as motorcycles.
1 photo
The most recent case surfacing the Internet comes from Miami, where a girl on a scooter gets involved in a crash after irresponsibly riding what it looks to be a Vespa scooter. According to the video description, these types of accidents involving rental scooters and improperly trained riders happen each day in South Beach.

Around the 20-second mark, you’ll see the lady trying to exit the parking on the other side of the intersection. Another scooter manages to exit first and continue along the road with no problem, but our miss here stumbles a couple times and then somehow manages to whiskey-throttle the tiny scooter.

Next come a few wobbles and brake attempts which finally led to a spill on the crosswalk diagonally opposed to the place where she left. Fortunately, it happened at a low speed, and no one got hurt in the process.

Whiskey-throttling is one of the most common mistakes among beginner riders and usually occurs when accelerating without being aware of what happens next. The scooter/motorcycle jerks forward while the rider’s body tend to remain behind which in turn pulls even more on the gas.

In such a scenario, the untrained rider will panic and won’t let go of the throttle, pulling it harder and harder until totally losing control and crashing into the closest obstacle.

So there you go - classy looking Vespas might seem cute and inoffensive, but threat it wrong and it will “sting” right off the bat. Take care of yourselves, people! Follow some riding classes before throwing a leg over any two-wheeled motorized vehicles. 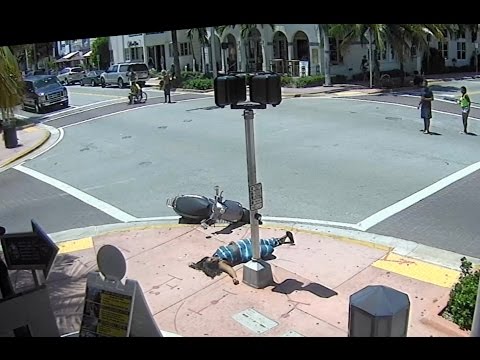