5 Fox Body Mustang Drags Pontiac Firebird Trans Am, Winner Has a Very Close Call
Up Next

Home > News > Auto Motorsport
Dragos Chitulescu
If you want to see how technology has progressed over the past two decades, just pay attention to the cars around you. Look at how much power an entry-level sports car was making twenty years ago. And then look at today's figures. If you go further back in time the progress is going to be even more obvious.
14 photos

Nostalgia aside, there's no denying that today's cars are faster. Notice I said faster, not necessarily more fun to drive. But if you want a fast car that's also safe and easy to drive, compromises need to be made. Older cars are more fun because they're more engaging and raw. It's mostly you and the car. And don't even get me started on the manual versus automatic gearbox discussion. We all know where that's headed.

And I feel that today's drag race is going to be a perfect example of the things I've mentioned above. We're looking at two tuned vehicles, one built in Germany and the other in Japan. A new-school hot-hatch going up against an old-school sports sedan. Initially, the producers were planning on a Mitsubishi Evolution as the opponent for the Subaru. But that car didn't make it to the track. And so the Audi RS 3 was sourced as a replacement.

The cars will be going through four challenges in total. First up, we'll get to see how fast they can reach 60 mph (96 kph) from a standstill. Then, it's the quarter-mile (402 meters) test. Right after that, two head-to-head runs, one from a standstill and one with a rolling start format. Rick is the driver of the "Hawk-Eye" STI, one of my all-time favorite vehicles. The turbocharged 2.5-liter unit puts out about 465 horsepower and 460 lb-ft (623 Nm) of torque. This is a fully stripped vehicle, weighing in at around 2,425 lbs (1,100 kg).

It does have the disadvantage of a manual gearbox. But going into the race I was hoping it would be a worthy opponent. The Audi RS 3 is also tuned, and its engine is rated for about 480 horsepower and 505 lb-ft (684 Nm) of torque. It's the heavier car here, weighing in at 3,328 lbs (1,510 kg). But it does have a DSG gearbox to work with. At this point, I expected a pretty evenly-matched event to be honest.

The Subaru sounds amazing, as you'd expect, but the launch for the first challenge felt a bit off. I'm not sure if the driver was trying to take it easy on the drivetrain or not, but it looked somewhat slow. The official result shows it needed 4.21 seconds to reach 60 mph. The RS 3 on the other hand is starting to look pretty menacing. Using its launch control, it only takes 3.19 seconds to achieve the same performance. But even without it, it's still faster than its opponent.

Things are looking grim for JDM fans to say the least, as the STI crosses the quarter-mile finish line after 12.82 seconds. The RS 3 is considerably faster, with a time slip of 11.51 with launch control and 11.72 seconds without it. At this point, it becomes clear that the STI can only stand a chance in the last challenge of the day. After it loses the first head-to-head battle, Rick gets one last chance of redemption with the rolling start. The lighter car has the advantage at first. But the RS 3 makes up for lost time with its advanced gearbox and wins the fourth run as well. 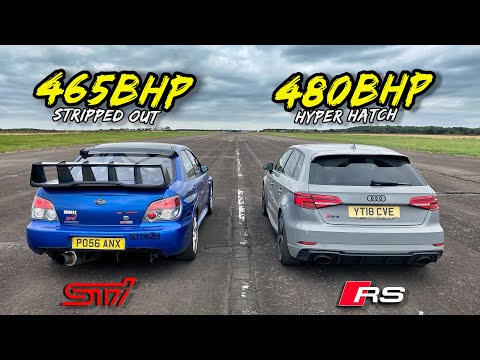