1 2022 Nissan 240Z Is Exactly the Modern Datsun Everybody Wants

3 Ford Mustang Leads Classic Car Searches In the USA, Nobody Is Surprised

5 Datsun Man Proposes to His Girlfriend the Horsepower Way, Is She a Fair Lady?
Car video reviews:
Coverstory

Back in the 1960s and '70s, the American public was captivated by the raging battle between American carmakers in the then recently created muscle car segment. Mesmerized by what was going on, few noticed there were other incredible cars around.
18 photos

One of those cars was the Nissan Fairlady Z, better known in the U.S. and elsewhere as the Nissan or Datsun 240Z. The two-seater sports car, meant to take on similar European projects, was first introduced in 1969 in Japan, and was to give birth to a whole lineage of Nissan models that would turn into the Z-car family.

Good-looking, reliable and fun to drive, the cars of the Z-family were to become favorites among the people shopping in this particular segment. To keep people interested, several variants of the original Z started being made, even from the first generation.

The first one was of course, the 240Z, which landed in the U.S. in 1970 with the quirky looks of the line and a 2.4-liter engine. Four years later came the 260Z, which sported a slightly enlarged engine, with a 2.6-liter displacement. Its presence on the market was short, as it was only sold for the 1974 model year in the U.S.

The 280Z, just like the one in the gallery above, came to be in 1975, with yet another bump in engine size to 2.8 liters. Even that, it seems, was not enough for the guys who worked on this here model.

This 280Z, coming to us from the 1977 model year, sports an even bigger engine. Sized 3.0-liters thanks to work done on the 2.8 by a California garage called Rebello Racing, the inline-six develops 346 hp at the wheel with the help of a Borg Warner turbocharger (dyno test available in the video below).

The engine overhaul concluded in the summer of last year, and since the the car has traveled for around 1,000 miles (1,600 km)

There are a number of visual changes made to the 280Z as well, to better suit the enlarged engine, including the overall lowering of the body, a carbon fiber bumpers and new fender mirrors.

With minor imperfections, like cracks in the center of the dash, the 280Z got sold earlier this week for a little over $36,000. 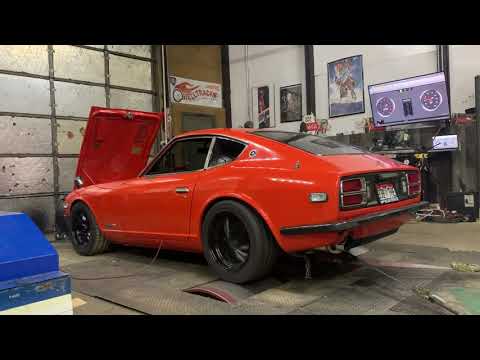