Imola Red BMW 740, “One of the Greatest Sedans,” Is Moe Shalizi’s Latest Whip

The most recent addition is a straight-piped McLaren 765LT Spider dressed up in a stunning Red Alcantara and white color combination that is now waiting for a host of new modifications. The latter will be provided courtesy of his friends, the good folks over at Hollywood, California-based RDB LA, who are used to dabbling with ultra-luxury or exotic monsters.

Alas, the latest YouTube vlog episode centered on two items. One would be a cool Jeep Wrangler that is getting a Rhino liner-style gray wrap to make it rugged yet cool at the same time. Alas, that one is not finished, so they moved quickly – from the 5:05 mark – to something that is not classic yet but has the makings of a vintage legend. It is a 2000 BMW 740 dressed in Imola Red that has reached Moe’s collection with a little help from RDB’s Vik.

The entire story, along with lots of behind-the-scenes details about this being one of Moe’s all-time bucket list cars, plus “one of the greatest sedans ever made!” (according to RDB LA) is embedded below, of course. But before watching it, let us recap a little about what made this 7 Series great – aside from Transporter and James Bond apparitions.

Born in 1994, the third-generation BMW 7 Series (code name E38) had gasoline and turbo diesel straight-six, V8, and a flagship V12 engine option. It was the final 7 Series available with a manual transmission, the first car with curtain airbags, as well as the first European model with satellite navigation. The 740i and iL models used a 4.4-liter V8 engine good for 282 hp, but this particular Imola Red example is now a little cooler thanks to RDB’s fitment of new wheels and tires – you can even see the sticker on a rear tire! 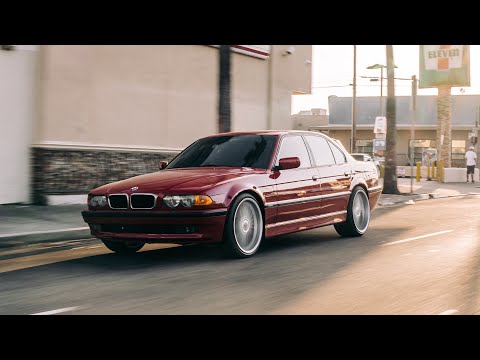