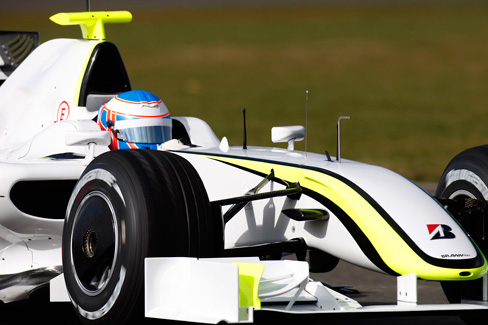 Brawn Grand Prix Formula One Team have revealed the first images of their 2009 challenger, designated BGP 001. Shortly after Honda announced it has sold all shares of their Formula 1 operations to former team principal Ross Brawn, race driver Jenson Button conducted the first proper test with the 2009-spec car at Silverstone.

The first image of the BGP 001 appeared on the team's new official website. The 2009-spec machinery features a white, black and yellow color scheme, and currently lacks a 2009 livery – as future sponsorship is yet to be secured/announced.

The fact that the BGP 001 was ready for its first showdown only hours after the official announcement of the new team is reason enough that the mechanics at Brackley have put in plenty of hours to develop the 2009 single-seater as initially scheduled. The car, featuring a revised aerodynamic package for the new season, will be powered by a 2.4 Mercedes Benz engine, as part of the engine-supply deal reached with the German manufacturer earlier this year.

At first sight, the main feature that catches the eye is the BGP 001's sidepods, due to their highly-sculpted design. Following the short showdown at Silverstone earlier today, both race drivers Button and Rubens Barrichello will conduct their first full test on the BGP 001 during the Barcelona group test.

As compared to the other F1 teams – who will take the 2 weeks after Barcelona off – Brawn GP is scheduled to test for another few days at Jerez.