1 Special Delivery for the ISS, Astronauts to Receive More Than 4 Tons of Supplies

2 Astronauts on the Space Station Held Their Own Olympics, Had Some Unique Games

5 Astronauts on the ISS Are Out on a Spacewalk and You Can Watch Them LIVE
Car video reviews:
Up Next

Even though it was demoted to a tropical depression this Sunday, Henri, the ex-hurricane continues to make quite an impression. We’ve all got a good look at it down here on Earth, where Henri continues to make the headlines, but we’re not the only ones. Astronauts on the International Space Station are also monitoring the destructive storm.
6 photos

The National Hurricane Center downgraded Henri to a tropical depression this Sunday, but not after leaving its mark on all the places it’s visited so far. Floods, power cuts, 65 mph (100 kph) winds, and a lot of agitation.

Everyone is keeping an eye on the bad-tempered storm, and not just down here. Astronauts on the International Space Station are also tracking Henri but from Space. NASA astronaut Megan McArthur shared on her Twitter a photo of the historic storm, with the caption “We just flew over the East Coast and saw Hurricane Henri. Stay safe, friends”.

The photo, which was taken this Saturday, shows Henri turbulently disturbing the Atlantic Ocean while approaching the U.S. Northeast coast near Long Island, New York.

After seemingly endless torrents of heavy rain, now it finally looks like Henri is calming down a bit, losing its hurricane rank and settling for the one of tropical depression instead.

Henri started as a tropical storm developed southeast of Bermuda, on August 16, but continued to grow in power. In New York, it caused what the NWS calls the wettest hour ever recorded when 1.94 inches of torrential rainfall pelted Central Park between 10 and 11 p.m. this Saturday. 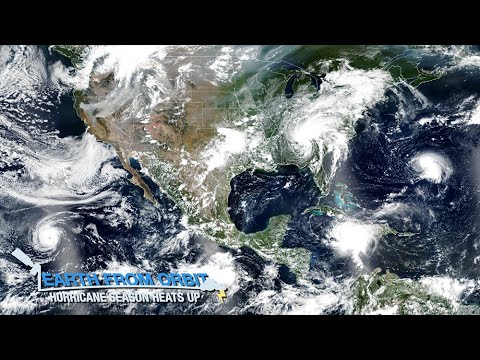