2 Royal Marines Say Jetpacks Are Not Ready for the Battlefield

3 Hunter Kowald Is Flying All Over LA in His Custom, Production-Ready Hoverboard

5 Man in Jetpack Flies into LAX Flight Path Again, This Time at 6,000 Feet
Car video reviews:
Up Next

If the name Hunter Kowald doesn’t ring a bell, it would serve you to remember it: you’ll probably be hearing it a lot in the coming months. That’s because Kowald, a brilliant engineer and popular YouTuber, has developed what he calls the “world’s most efficient and powerful personal hovercraft aircraft.”
Humanity’s decades-long dream of individual flight is no closer to reality today than it was back then, at least not in a realistic sense. We do have jetpacks, aka Iron Man suits, but they are too expensive to own, too inconvenient to fly, and not properly regulated. This product could be the one that changes everything, or so Hunter Kowald hopes.

We’ve spoken about Kowald and his homemade oversize drone before. The personal aircraft is called Hovercraft (SkySurfer Hoverboard Aircraft, in full), and is the result of years of tinkering, and one full year of experimenting and improving. Kowald has hinted online that he’s completed work on a production prototype, and he’s been flying it around his hometown of Los Angeles since.

Earlier this week, he took it to New York, where he rose to 30 feet (9.2 meters) over Manhattan, over Times Square, drawing comparisons to Spiderman’s Green Goblin. Passers-by understandably gawked and started shooting footage on their phones, and videos went viral almost right away.

Kowald has come forward to confirm that it really was him doing the stunt. He tells the NY Post that, contrary to what anyone might assume, he wasn’t doing anything illegal. “We checked with the police and everything was OK to do a little quick demonstration,” he says of the seemingly impromptu flight into heavily regulated Manhattan airspace. The NYPD isn’t so sure, saying in a separate statement, “We are aware of the video and are looking into it.”

Kowald says he was in town for another business op, when the chance to do this demonstration came up and he didn’t want to miss it. He insists his SkySurfer Hoverboard is perfectly safe, both for himself and pedestrians. In typical fashion, he doesn’t offer more details of the build, except to note that it’s 100% homemade.

Though the plan is to eventually mass produce and sell the Hoverboard, Kowald has been very secretive about his invention. He’s said before that it includes several redundancies for safety, including the ability to land in the event two engines shut down, or one of its five power systems. Total payload is of 500 pounds (227 kg) and Kowald, at 180 (82 kg), can fly for up to 20 minutes on it. Total flight time is dependent on the weight of the operator – or skysurfer, as Kowald calls himself.

The oversize, human-carrying drone is made of industrial-grade material and carbon fiber, and includes industrial-grade equipment like FAA aircraft navigation lighting. Kowald says “more” such aircraft are on the way and, while he’s never publicly mentioned a price tag, rumors online mention a $20,000 starting point.

Until the full spec list is revealed, Kowald is doing what any YouTuber slash influencer worth their salt knows best: self-promotion through viral videos. There’s really no better way to drum up interest in a new, possibly revolutionary product than by showing EXACTLy what it can do, even if it means breaking the law and risking your life. 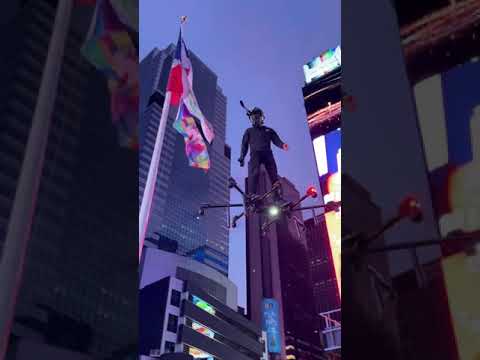