Daniel Patrascu
As if choosing what car to buy next is not difficult enough, with all the different criteria, features and ratings one has to pay attention to, the Insurance Institute for Highway Safety (IIHS) announced on Wednesday the introduction of a new rating program.
1 photo
Called rear crash prevention ratings, the new program will classify cars equipped with technology that can prevent or mitigate low-speed backing crashes. That includes parking sensors, rear cross-traffic alert, rear automatic emergency braking system and parking cameras.

The most highly regarded feature by the IIHS is the rear automatic emergency braking system. To have a shot at the highest rating, cars tested must have this feature. There will be two ratings available, superior and advanced.

Under the new IIHS system, cars equipped with optional or standard rear crash prevention systems are rated superior, advanced or basic, depending on the technologies used. Testing is being done in the case of vehicles fitted with rear automatic brakes by doing car-to-car and car-to-pole tests with different approach angles.

The Outback and XT5 earn a superior rating when equipped with an optional rear auto brake, parking sensors, and rear cross-traffic alert, while the Cherokee, the BMW, the QX60 and the Prius earn an advanced rating with this optional gear.

"Let's face it. Some days we all could use help backing up, whether that's in a garage with pillars that obscure your view, in a crowded mall parking lot or on a busy downtown street," said David Zuby, the Institute's executive vice president and chief research officer.

"The systems we rate in our first batch of tests will help reduce the chances of a backing fender-bender."

According to IIHS data, auto braking can help reduce backing crashes by as much as 78 percent. These technologies are needed, says the organization, due to the high cost of repairing damage. 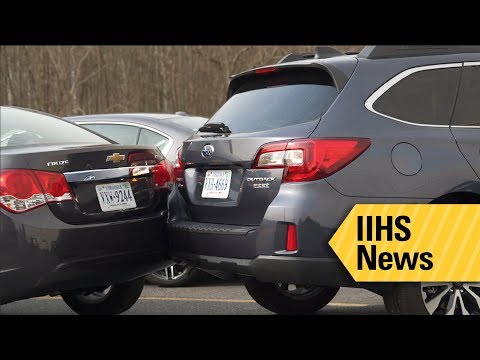