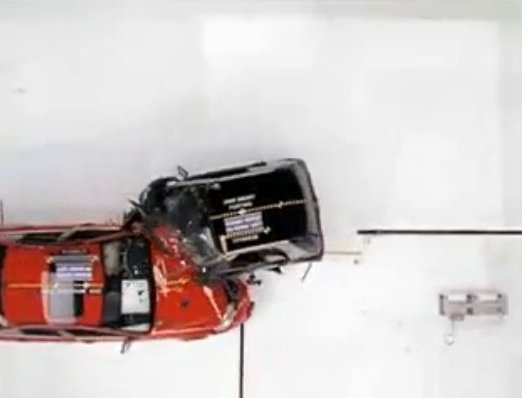 The IIHS small cars crash tests released yesterday, as we already told you, proved once again that when it comes to crashes involving small and medium cars, size does matter. The tests showed, as was to be expected, that small cars are more likely to be trashed than the bigger ones.

As we said, IIHS tested Honda Fit, Smart Fortwo, and Toyota Yaris and their performances against the bigger Honda Accord, Mercedes C Klasse (C300) and Toyota Camry. All of the first three vehicles proved they are "poor performers in the frontal collisions with midsize cars". The test were conducted at a speed of 40 mph (65 km/hour).

One by one, the Fit, the Smart and the Camry fell victims to their bigger counterparts. The fit proved a very unsafe car to be in, as the head of the dummy struck the steering wheel through the airbag and intrusion in the passenger cabin was extensive.

The Smart managed even worse, as after the impact the small car went airborne (all of the car's four wheels left the ground at the same time) and went into a 450 degrees spin. As for the Yaris, it too was nearly torn away, registering extensive force on the neck and legs, which in turn earned the Yaris a poor overall rating in front-to-front crash tests.

Out of the three medium sized vehicles tested, all performed good, except for the Camry, who received an "acceptable" rating to the damages it was subjected to. The videos you can see below are also shot in slow motion, so take a good long look at them before deciding to go for a small or medium sized car.