1 Independence Day Special: What Were Americans "Driving" In 1776?

You don't need a degree in physics to imagine what would happen if a train hit a car sideways (or any other way) at full speed. In fact, all you need is a device with a display that can connect to the Internet. Oh, and the stomach to watch all those horrible crashes.
7 photos

If you've ever driven on the highway near a field covered in crops and had all sorts of bugs smashing against your windshield, then you've got a pretty good representation of what it would be like. The thousands of tons of that train would go right through the mere two or so of the road vehicle, leaving nothing but a trail of debris behind it.

So, for any normal human being, that's something you'd want to avoid. Thankfully, people have made it much easier by installing gates and flashing lights and alert sounds - everything one might need to be informed of the approaching of the train. You can't see? Then there's the alarm (plus, you shouldn't be driving). You can't hear? Got you covered with the red flashing lights. Have no common sense? No problem, there are the actual gates that make it very clear you shouldn't pass by blocking most of the road.

Still not enough? Obviously not because the locomotive handlers still feel the need to sound their horns as they approach the crossing, just to make sure everything save for a personalized text message is sent the drivers' way to let them know they should stop. And what do drivers do? They ignore all this commotion because stopping for a minute or so is worse than anything, including a violent death.

Things like this happen hundreds of times every day across the country, but this particular video is on another level. You read the title ("Car ignores train gate and crosses street") and, despite the fact it says "street" instead of "railroad," you still think you know what to expect. Then the gates start lowering and you see the silver Honda Ridgeline scurry across when it should have stopped instead and think it's over. Except it's not. Have sound switched on for the full thrilling effect. 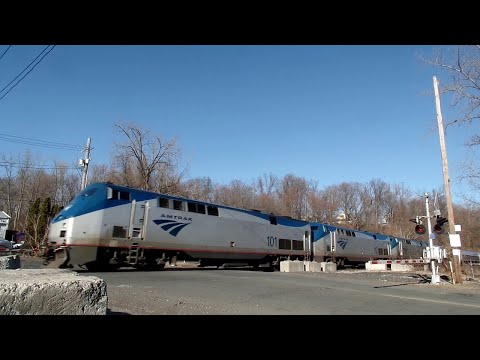